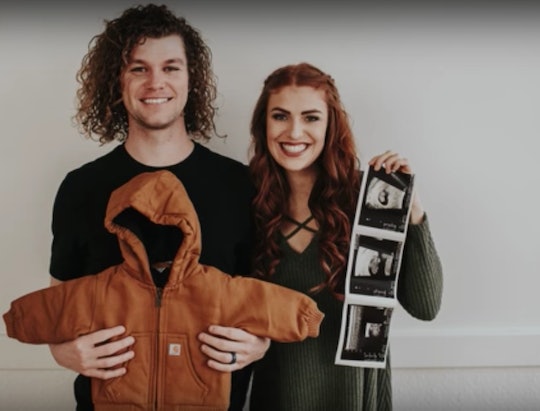 The world first met Audrey Roloff on the TLC show Little People, Big World, and fans of Roloffs have gotten to know her baby daughter, Ember, too, through Roloff's photos of her daughter. It's been just seven months since Roloff gave birth to Ember, but she and husband, Jeffrey Roloff, have been sharing all of Ember's "firsts" with their fans across their social media channels. And they're firsts fans don't want to miss.

Audrey and Jeremy met when they were home from college for the weekend in Portland in January 2010, according to Good Housekeeping. The two were set up on a blind date by mutual friends before church and they've admitted on TLC that their first date was super awkward.

"I thought he was cute when he walked through the door, but I wasn’t, like, seeing the future in that moment," Audrey said, according to Good Housekeeping, and Jeremy added, "Contrary to what many believe, it wasn’t love at first sight, necessarily."

They ended up as friends and, ultimately, remained long-distance in their friendship for two years before any romantic interest sparked. Then they had a long-distance relationship for three more years before Jeremy proposed to Audrey (when they were still dating long distance) in 2014, according to Good Housekeeping. But despite the couple's memories of their awkward first date and ensuing long-distance years, they went on to start an adorable family of three that their fans can't seem to get enough of.

In February 2017, the couple announced in an online video that they were expecting their first child. And their daughter, Ember Jean, was born on Sept. 10, 2017, according to Us Weekly.

"She's absolutely beautiful ... a face that draws you in. What a miraculous experience," Jeremy wrote on Instagram.

In a video for TLC, the new parents shared the inspiration behind Ember’s name. Audrey said, "Jeremy and I fell in love around campfires, so campfires and embers have just had a lot of significance in our relationship. We want her to be a little fiery one."

And ever since then, they've been keeping followers updated with her firsts and sharing plenty of photos of Ember. Like Ember's first day...

Most recently, Audrey shared photos of Ember's first beach trip from Maui, Hawaii, where the family has been vacationing, according to In Touch Weekly.

She captioned one series of Instagram photos of her family vacation: "Ember got a sandy bum and salty toes for the first time! She loved it! Especially the taste of sand… We are cherishing this much needed sunshine and time as a family away from the tyranny of the urgent."

There was also Ember's first crawl...

Other times, Audrey posts photos about her own firsts. They come in PSA form to other moms to let them know that they're not alone in their oftentimes questionable parenting journey.

She also went on about baby injuries and carseats and dental hygiene and healthy diets and sleep schedules, adding that she'd be sharing what she learns and where she fails in an effort to help encourage other moms.

And Audrey's kept her word. She posts a ton of photos of Ember with captions about what she's learned about parenting.

And then, of course, there are times that she just posts photos to share all the things she loves about her baby.

New moms are notorious for flooding social media with photos of their babies. But no one seems to mind these Ember firsts and memorable moments, and I don't blame Audrey for sharing every single one of them.