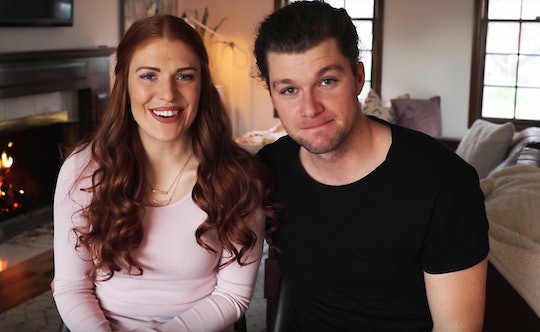 Audrey Roloff's Breastfeeding Story Is Something Other Moms Can Relate To

The Roloff family, or the stars of the TLC reality show, Little People, Big World, are no strangers to sharing details about their lives with strangers. Former Little People, Big World stars Jeremy Roloff, and his wife, Audrey Roloff, are super open with their fans and followers about how their life is as parents to their young daughter, Ember Jean Roloff. Jeremy and Audrey are open about everything (blame the TV cameras) — from their relationship with one another, to pregnancy rumors, to even breastfeeding. And Audrey Roloff's quotes about breastfeeding show that she's not afraid to be real.

Although Jeremy and Audrey announced last month that they would no longer be appearing on Little People, Big World, according to CNN, fans didn't get discouraged. This is because fans are aware that Jeremy and Audrey are super active on their Instagram accounts, where they document their day to day lives for everyone to see.

Since Ember's birth on Sept. 10, according to TLC, Audrey has been nothing but open with her fans — and breastfeeding has been a very important topic for her, which she has addressed multiple times on Instagram and on Little People, Big World. Although Audrey's quotes about breastfeeding might be a little controversial at times, according to People, it's just proof that she isn't afraid to be herself and stand up for what she believes in as a mom.

Where She Stands On Breastfeeding

I was very adamant about breastfeeding, exclusively. Formula, was like, a sin. I just never thought I would do that, but at the same time, I need to feed my baby, so we have to do it.

Her Struggle With Breastfeeding

Although she loved the idea of breastfeeding, Audrey revealed in that same exact episode this past May that breastfeeding her daughter had been a struggle for her — especially since she developed mastitis, or a breast tissue infection, early on in her daughter's life. Audrey documented this struggle in the episode, saying, according to People:

I spent 16 hours a day, in a 24-hour period, feeding. At our one week doctor's appointment, I'm like "I'm nursing every hour, all night," and he's like, "That's not right." At that point, they were like, "You need to supplement because you're not giving her enough."

It took me a solid two months, maybe two and a half months before I started seeing an increase in my supply and breastfeeding became a lot easier. Since delivering Ember, I struggled with mastitis on and off. I was severely engorged. On top of that, Ember had a really severe tongue tie that we had to get surgically fixed two or three weeks after she was born. Before that I was having a lot of blistering and bruising.

& Her Successes With Breastfeeding

Although she did have a rough start with breastfeeding, Audrey overcame adversity and her mastitis to exclusively breastfeeding her daughter by the time she was 6 months old. Audrey documented this all in the most empowering Instagram post. Audrey wrote in the photo's caption that other moms shouldn't give up:

With all the issues I endured in those first few months, we were told that we'd never be able to exclusively breastfeed. Yet here we are at the 90th percentiles on pure mama milk! This post is not to discourage anyone whose journey looked different than mine, I'm simply praising God for fulfilling this desire of my heart. Breastfeeding is a blessing, but I understand it's not always a choice. Rock on mamas. Don't compare your story to mine or anyone else's.

The more that Audrey is open with her fans on her Instagram, the more they can relate to her in all of her successes and struggles. Her journey with breastfeeding her daughter only highlights this.