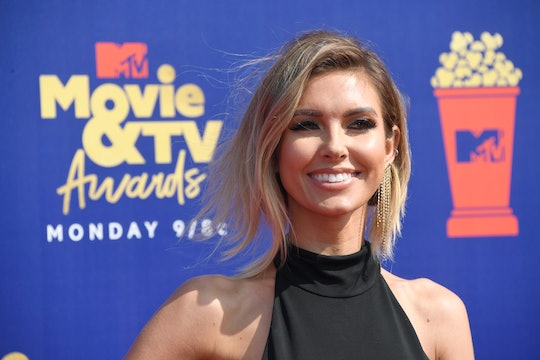 'The Hills: New Beginnings' Star Audrina Patridge Is Adjusting To Life As A Single Mom

Hills alum Audrina Patridge has been back in the news lately, thanks to her recent return to TV. But the former drama queen, who's now appearing in the show's reboot with her old castmates, isn't exactly the same these days thanks to some life changes. In fact, Audrina Patridge’s updates about life as a single mom (and her precious daughter, Kirra) prove that she's currently through an adjustment period.

More Like This
Pregnant Olympian Shawn Johnson Cried When Her Daughter Was Sad At Drop-Off
Is The Tooth Fairy Real?
30 Vintage Photos Of Parents Giving Their Babies A Bottle
Halle Berry Shared A Beautiful Throwback Pregnancy Photo On Mother’s Day

As People reported, The Hills alum has definitely racked up lots of life experiences since fans last saw her on TV. Instead of chasing around love interests (back in the day it was Justin Bobby and Ryan Cabrera), the reality alum is dealing with heavier issues, like divorce. Some fans might already know that she divorced BMX biker Corey Bohan in 2016 amid allegations of violent behavior, as People noted. “My life is so different now,” Patridge explained to the publication. “I was still young and learning and experiencing life. I’m an adult now. And I’m definitely wiser.”

Despite the personal setbacks, the star said she is finally able to look forward. “I needed to close a door so I could keep moving forward in my life and not look back,” said Patridge, according to iHeartRadio. “[The divorce] took a lot of weight off of my shoulders.”

Patridge's main priority these days is an adorable one: Kirra, who just turned three. “Being a mother gives you purpose,” said Patridge, whose social media is full of adorbs mom-and-daughter shots, including a girls trip to Disneyland and Kirra's recent mermaid-themed birthday bash.

As for the Hills reboot, Patridge, a swimsuit designer, teased to Us Weekly that there may be a little of that old magic there with Bobby, even if it only ends in flirtation. "... Anything can happen. I really don’t know," she said. “My daughter has met him, and they loved each other...My daughter’s not on the show, so that part of my life no one will really get to see. I do talk about what I’m going through [though]."

Considering OG stars Lauren Conrad and Lo Bosworth decided not to appear in the reboot, as Refinery29 noted, there was obviously room for some fresh faces, some of which may seem like puzzling additions. One such addition, for example, is The OC's Mischa Barton. Kind of strange, no?

Whether or not the new show causes the same sensation as the original remains to be seen, but it's clear Patridge has learned a lot in these last few years.

“Divorce is like mourning a death,” the reality star told People. “You’re ending a chapter in your life. And when you have a child in the mix, it makes things harder. Then, to add in publicity and people judging you … makes it a million times worse...So [being back on The Hills] is a new chapter for me. I have a daughter to protect.”

Personally, this show sounds interesting to me from the perspective of a single mom, but I'm a little bummed out to hear that Kirra won't appear on the series. But as Patridge mentioned in her life update, Kirra's safety and privacy are what's most important here.