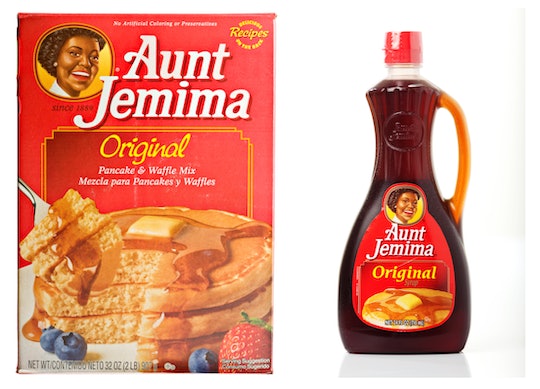 Amid worldwide conversations on how to dismantle systemic racism and make lasting progress, Quaker Oats has announced that the breakfast syrup brand Aunt Jemima will be renamed and the image on the label will be removed after acknowledging that it's based on a racist stereotype.

"We recognize Aunt Jemima's origins are based on a racial stereotype," Kristin Kroepfl, vice president and chief marketing officer of Quaker Foods North America, said in a press release Wednesday. "While work has been done over the years to update the brand in a manner intended to be appropriate and respectful, we realize those changes are not enough."

Aunt Jemima's parent company Quaker Oats, a subsidiary of PepsiCo Inc., will remove the image of Aunt Jemima on the products towards the end of 2020 and be renamed at a later date, though no specific details have been revealed yet. "We acknowledge the brand has not progressed enough to appropriately reflect the confidence, warmth and dignity that we would like it to stand for today," Kroepfl said. "We are starting by removing the image and changing the name."

"We will continue the conversation by gathering diverse perspectives from both our organization and the Black community to further evolve the brand and make it one everyone can be proud to have in their pantry," Kroepfl continued.

According to Ferris State University, the Aunt Jemima image is based on the "Mammy caricature," a maternal Black figure that served as "proof" that Black women could be happy as slaves. "Her wide grin, hearty laugher, and loyal servitude were offered as evidence of the supposed humanity of the institution of slavery," the university explains on its site.

The brand was born in 1889 when two men — Chris Rutt and Charles Underwood — developed a self-rising pancake mix that only needed water. They reportedly named their brand Aunt Jemima after Rutt attended a minstrel show and heard the song "Old Aunt Jemima," which was originally sung by field slaves and later adapted for shows, according to Scientific American. The two men later sold the brand to the R.T. Davis Company, who hired the first woman to serve as the live model for Aunt Jemima in 1893. The woman, Nancy Green, was born a slave in Kentucky in 1834, according to USA Today.

In 1989, Aunt Jemima received her first makeover since 1968, adding to the six other makeovers in total, according to The Chicago Tribune. This new image of Aunt Jemima featured gray streaked hair, pearl earrings, and a white lace collar. "We wanted to present Aunt Jemima in a more contemporary light, while preserving the important attributes of warmth, quality, good taste, and reliability," a representative for Quaker Oats told The Chicago Tribune at the time.

But the brand's mascot still remained controversial. In 2014, Green's heirs and other descendants of Aunt Jemima model Anna Harrington sued the company because it made "false promises" to Green and Harrington, according to USA Today. Throughout the years, others have called for the company to rebrand because of the racist stereotypes. Now that rebranding is happening.

In addition to changing the name and removing the image, the Aunt Jemima brand will donate a minimum of $5 million over the next five years to "create meaningful, ongoing support and engagement in the Black community," the company announced Wednesday. PepsiCo Inc. announced this week that they will invest more than $400 million over five years to lift up Black communities and increase Black representation in the company.

"These steps are only the beginning," PepsiCo said in a statement. "Over the next few years, we will expand our pursuit of racial and social justice in communities all over the world. We proudly stand with our Black associates and Black communities, and we believe unequivocally that Black Lives Matter."