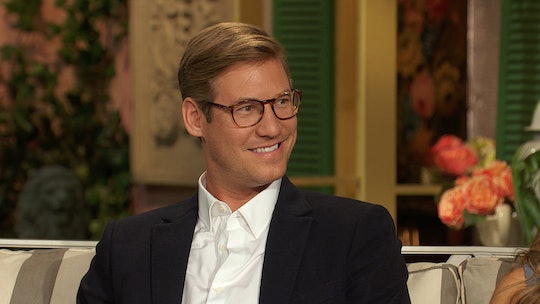 Austen & Madison's Relationship Is Full Of Drama On 'Southern Charm'

Austen Kroll and Madison LeCroy's relationship has not been in a good place during Season 6 of Southern Charm. They've dealt with cheating scandals, breakups, and Shep Rose's unrelenting insistence that Madison is not the girl for Austen. And while Shep's delivery left something to be desired, not least because it came with a hefty helping of hypocrisy and shaming, Austen and Madison on Southern Charm are probably better off apart.

Austen and Madison did eventually break up, but it seems like the split might not stick. They have been in contact since deciding to call it quits and the promo for "Rocky Mountain High Part One" indicates that they might be taking things up a notch during Cameran Eubanks' birthday trip to Colorado. Cameran invited Madison along, and she seems fairly convinced that Madison and Austen are going to hook up during the trip.

Now, Austen and Madison are grown adults who can do whatever they want. If they want to break up and get back together five thousand times, that is their right. They could one-up Liz Taylor and Richard Burton if they so chose. But it's hard to watch them without chanting "DUMP HIS A**" in your head like Max from Stranger Things.

Madison and Austen are not technically together, but they're still in each other's orbit, which makes it tough to move on. And personally, I think moving on seems to be the best course of action for both of them. Trouble started in their relationship when Austen allegedly cheated on Madison with two women — something he hasn't ever completely owned up to, even though the video of his subsequent fight with Madison has been seen far and wide.

While talking to Entertainment Tonight, Austen insisted that he had "no clue" what exactly happened with those women. But Madison was convinced he cheated, which she confirmed during an appearance on Watch What Happens Live with Andy Cohen. Because of that, she figured she was free to cheat in return, and she did. That was the chief reason Shep was anti-Madison: he didn't think revenge cheating was the best course of action in any relationship, though it mostly came off like he had a double standard, especially since he wasn't really holding Austen accountable for his own part in things.

It's impossible to fully judge anyone's relationship from the outside, but hold my beer while I do it anyway. Based solely on what's been shown on Southern Charm, it doesn't seem like Austen and Madison were having a great time together. Things were bad enough that they decided to break up, and not much has changed since then; they haven't publicly come to a greater understanding about their respective betrayals and what that means for them as a couple. They may be drawn back together by romantic hot tubs in Colorado, but that might not be the best thing for either of them. Sometimes you just have to call it quits when it's not working, or else subject your viewers to another season of the same merry-go-round.