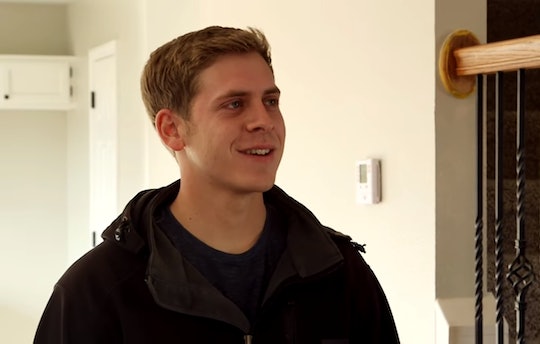 With Joy-Anna Duggar expecting her first baby, fans may be wondering if her husband is able to provide for his growing family, especially since — considering the amount of kids the Duggars have — it could grow quite a bit. So what is Austin Forsyth's net worth, and what does he do for a living? It looks like he's following the same career path as his famous father-in-law, and Jim Bob Duggar has done well enough to afford two full baseball team's worth of kids, so it's a safe bet that the latest Duggar offspring won't want for much. Plus, they'll likely never have to shell out for child care.

Forsyth, who's known his new bride's family since he was 4, according to Us Weekly, grew up in a family similar to the Duggars. Profiled in the now-defunct CMT show World's Strictest Parents, which paired troubled teens with, you guessed it, strict parents, Terry and Roxanne Forsyth required their children to wear "modest" clothing, abstain from kissing until marriage, wake up at 6:30 every morning, and never close their bedroom doors. Since their son reportedly doesn't allow his wife to wear pants, according to In Touch, it looks like he's keeping those traditions intact for the next generation.

For work, the Forsyth family runs a Christian family camp in Arkansas with an Old West theme. The junior Forsyth appears to have worked at the camp at some point, as his picture is featured on the website, although the site's been updated only sporadically in the last few years. But that's not all he does. As he graduates from a bit player to a more central character on TLC's Counting On, Forsyth can expect to make as much as $35,000 per season, depending on how much screen time he gets, according to Business Insider.

That's still not Forsyth's primary source of income, however. He's also a house flipper, just like Jim Bob Duggar and seemingly every other reality star on TLC. When asking Duggar for permission to "court" his daughter last season, Forsyth said that he was doing well, and also mentioned a side business involving bulldozers. On a promo for the current season, Forsyth's now-sister-in-law Jill Dillard revealed that he was about to finish flipping his fifth house. Duggar has parlayed house flipping and reality show breeding into a $3.5 million fortune, according to Celebrity Net Worth, so if Forsyth follows in his footsteps, things are looking good for him.

According to TIME, average gross profit for house flipping during the first quarter of 2017 was $58,520, and repairs generally eats up about half of that amount. If Forsyth can manage to flip three houses a year, and stay on TV, he'll be able to pull in at least six figures annually. And since house flipping couples and giant Christian families are TLC's bread and butter, a Forsyth spinoff could be the perfect formula for the network's next hit.

The only variable in the equation is Forsyth's likability. He and Joy-Anna first got engaged in March, and two months later, they abruptly moved their wedding date up from October to, like, right freaking now. Three months after that, the couple announced that they were expecting, which has left some fans very suspicious about how seriously they took their abstinence pledges. (Romper has reached out to the Duggars' representative for comment.) Also leaving a bad taste in some fans mouths is the way they've packaged their baby news, by posting a story on Instagram featuring Joy-Anna's protruding stomach, an anti-abortion meme, and a photo of Forsyth holding a sign reading "ABORTION KILLS CHILDREN." Congratulations and yikes, I guess? Counting On's two-hour wedding special premieres on Monday, and the ratings will tell whether America's ready for more Forsyth or not.