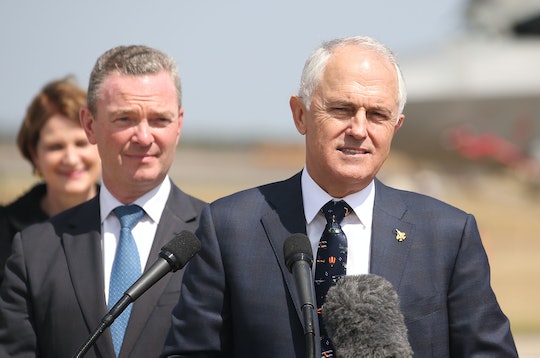 As doubts about vaccines persist in the deepest, darkest corners of the Internet (aka, Twitter) health agencies around the world are making efforts to encourage vaccination rates to increase. Prime Minister Malcolm Turnbull announced this weekend that he wants to introduce legislation aimed at ensuring young children are vaccinated. Australia might not allow unvaccinated kids in childcare centers, according to the BBC, and it's part of a trend of strong health measures in the country.

"This is not a theoretical exercise — this is life and death," Turnbull told News Corp, noting a death related to the measles in the United States. "If a parent says, 'I'm not going to vaccinate my child,' they are not simply putting their child at risk, they are putting everybody else's children at risk too."

The Guardian reported that, in a letter to state leaders, Turnbull wrote that "vaccination objection is not a valid exemption. We must give parents the confidence that their children will be safe when they attend childcare and preschool."

The proposed legislation is a strong move in a country where vaccinating children is not a legal requirement, according to the BBC. Brisbane Times reported Michael Gannon, president of the Australian Medical Association, believes parents have a duty to protect other kids as well as their own. "If you, as a parent, expect the community to support you by either welfare payments or access to care, then you need to do your bit to contribute to that community by protecting other children." He also noted that young children are the focus of the legislation because they have "a higher risk of catching infections."

So far, the efforts to keep unvaccinated kids out of day care centers appear as though they won't reach elementary schools or beyond, Gannon told the Brisbane Times:

I would not advocate for unvaccinated kids being denied access to primary school ... We believe that unvaccinated children are already at a disadvantage. We would hate to compound that disadvantage by depriving them of a formal education.

Australia already has a firm stance on the importance of vaccinating children. In 2016, a measure was implemented to deny welfare payments to families with unvaccinated children under the age of 20, known as "No jab, no pay." The government also ended religious exemptions for Christian scientists who do not believe in vaccinations in 2015, The Guardian reported.

Could such legislation occur in the United States? If it did, it would likely be controversial. Some would oppose such legislation by arguing that it infringes on religious freedoms, while others might feel that revoking financial assistance from the poor in order to encourage them to vaccinate is discriminatory. But the opposite method — giving financial incentives to parents or to the doctors who counsel parents on vaccines — has been considered in the past to boost immunization rates.

But it's obvious such drastic measures are working. Australia has a vaccination rate of 93 percent among 5-year-olds, and is aiming to increase the rate to 95 percent, according to the Australian Childhood Immunisation Register. That rate is stronger than in the U.S., where 92 percent of children younger than 3 years old have received the MMR vaccine but only 82 percent have received a vaccination against meningitis, according to the CDC.

And for teen vaccination rates, Australia has made far more progress than the United States: more than 70 percent of girls have received all 3 doses of the HPV vaccine, which resulted in a 93 percent decline in rates of genital warts. The number of teen girls in United States who have received all three doses? Just 42 percent, according to the CDC. Maybe the U.S. should consider a similar policy, but it's clear, for now, such a national effort wouldn't happen as long as Trump is president.