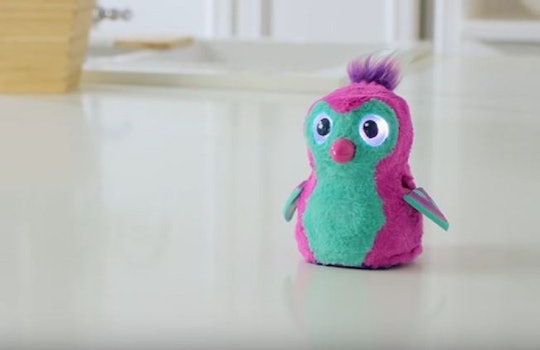 If you're a parent of a school-age kid at the moment, then you probably know that Hatchimals are the must-have, and also impossible-to-get, toy of the 2016 holiday season. Retailers are sold out and parents are shelling out hundreds of dollars for the $60 toy, because exhausted, broke, and desperate parents are the hallmark of any good holiday. If you're among that sad group, here's someone that's really going to make you angry. An author bought $23,500 worth of Hatchimals to squeeze parents so she could raise money for a project she's working on. And parents are not having it.

According to her Facebook post explaining the fundraiser, Sara Gruen, the best-selling author of Water for Elephants said she had a hunch Hatchimals were going to be a popular Christmas toy this year, so she bought up a huge supply with the intent of jacking up the price and making a huge profit, according to the Huffington Post. Somehow she didn't consider how this would sound to parents frantically trying to get their hands on one. Gruen said, according to her post:

I heard about them the day after Black Friday (a term that sends shivers down my spine) and my spidey-sense told me that they were the new Cabbage Patch Kids. Over the next two days I bought up 166 Hatchimals from eBay.

What she didn't consider before cornering the Hatchimal market is that sites like Amazon and eBay try and discourage large-scale re-sellers so they limit the number of Hatchimals anyone can sell to a few per week.

So—and here I cringe and hang my head in shame and feel sick to my stomach—if you or anyone you know wants a Hatchimal, here is a link to my Shopify store front. If you think I’m spamming you and hate me for it, I completely understand. But I have a fortune invested, only one venue to offload them, and in only three weeks they will magically transform into useless pumpkins that will take up space in my office FOREVER, and have caused my financial ruin.

She said she came up with the plan to resell the toys at a markup in order to "get justice for a wrongfully convicted man who was sentenced to LWOP (Life Without Parole) 23 years ago, and who has been incarcerated since," on her Shopify storefront selling the Hatchimals. Gruen hasn't responded to Romper's request for comment on the situation.

If you're not familiar with the Hatchimal craze, here's a quick video to get you up to speed:

According to The Philly Voice, Gruen isn't providing many details about the project or the person she's trying to help, but she said it's a docu-series similar to Making a Murderer. She also told the Philly Voice she's already in debt more than $150,000 on the project on top of the $23,500 she's sunk into her Hatchimals re-sale efforts.

Here she is with her stash:

So the good news is that if you're a desperate parent, there appear to be a new load of Hatchimals hitting he market. But many commented on Gruen's Facebook page with some harsh words. One woman commented on her Facebook post:

You're fu---ng kidding me right?" "You rob hundreds of parents of the opportunity to get one of these at a reasonable price for their kids, and now you're begging for them to come bail you out of your greed induced moment of stupidity? Um... no.

There are more than 150 comments on the post already, most from folks who aren't happy with Gruen's attempt to hijack Christmas.

But if you're one of those parents who just wants to score a Hatchimal, no matter what the cost. Head on over to Gruen's store and make her an offer, she's ready to unload a whole bunch of Hatchimals. And at least you can know that the money you're spending is going to get someone who was wrongfully convicted out of prison. And that's a nice holiday thought.