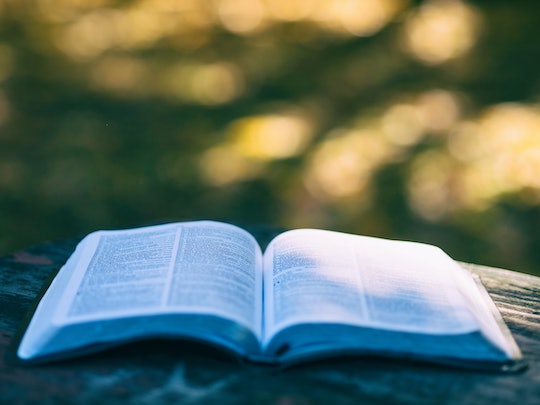 There are many ways to promote a book, but author Erin Chack may have blown them all out of the water. Forget trailers and blurbs — Chack "gave birth" to her book, and the resulting photos are hilarious. If her writing is as inventive as her publicity for it, you're going to want to run out and get this book immediately. (Or, I guess, order it online like a cool, internet-savvy person.)

Chack, who writes for BuzzFeed when she's not popping out books, recently published a collection of personal essays called This is Really Happening. According to the book description, Chack's stories take on "everything from meeting her soulmate at age 14 to her first chemotherapy session at age 19 to what really goes on behind the scenes at a major Internet media company." So it already sounds both juicy and moving. I actually came across an essay of hers a few days ago, titled "My Boyfriend Isn’t My Soulmate, He’s My Carrot," and thought while reading it, "Hey! This woman seems funny." And then I saw the photos she posted on Tuesday, and realized how wildly I'd underestimated her.

Chack knows that a book's entrance into the world is a big deal, so she decided to celebrate with photos of her actually giving birth to it, going for details right down to the hospital bracelet, a "nurse," and that sweaty, post-birth cuddle. (It's important to bond with your book.)

When talking to Buzzfeed about how the whole thing came together, Chack said,

I was on the phone with my best friend Alijah one night a couple months ago and we were talking about the book, and at the same time we were like WE SHOULD DO A BIRTHING PHOTO SHOOT because we have the same brain.

So before she came to New York from Boston for the book launch party Alijah grabbed a surgical mask from her doctor and I swiped some latex gloves from a bagel shop in Queens. And then we set up the futon in my living room to look like a hospital bed, pinned an old duvet cover to the wall to look like a curtain, and placed the flowers people had sent me for the book nearby and voila, we had our set... Alijah was super convincing as the OB because she recently had to babysit for a kid while the mother had a home birth in the next room over.

Chack follows in a long line of authors who've used... unconventional methods for promoting their books, like Jennifer Belle, who hired actresses with "infectious" laughs to giggle over her book on the subway. But Chack's photo shoot may be the gutsiest, strangest self-promotion yet.

In Tiny Beautiful Things, author and professional wise lady Cheryl Strayed tells aspiring writers, "Your book has a birthday." Kudos to Chack for taking that very, very literally and giving the rest of us an excellent laugh in the process.