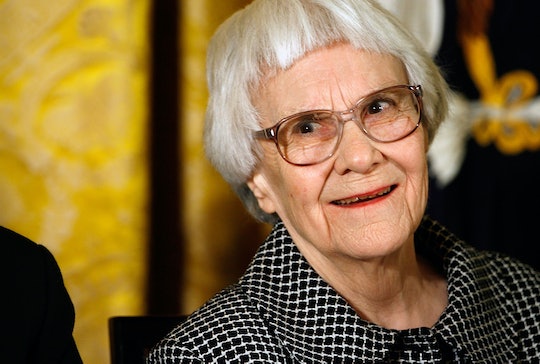 To Kill A Mockingbird author Harper Lee died at 89, according to AL.com. Multiple sources who live in her hometown, Monroeville, Alabama, confirmed the news on Friday. Lee's book is required reading in many schools for the compelling narrative, but also because of the way it depicted racial tensions in the South, according to The Guardian. Lee won the Pulitzer prize for the novel in 1961.

Though it's unclear how Lee died, AL.com reported that she suffered a stroke in 2007 and made a full recovery. After the stroke, Lee lived in a nursing home less than a mile from her childhood home, according to the Guardian. Prior to that, she lived in New York, and only moved back to Alabama to care for her sister, Alice. During that time, she could reportedly be seen eating breakfast at the same fast food place every morning and then picking up Alice at the law firm that their father founded in Monroeville.

Other than that, Lee was stayed out of the public eye and was often described as reclusive. She was the youngest of four children, and she was a tomboy, according to Biography.com. The characters of To Kill a Mockingbird, were actually inspired by her own life. Atticus Finch was reportedly inspired by her father, Amasa Coleman Lee, Scout was inspired by a young Lee, and Dill Harris was modeled after Truman Capote, whom she was friends with as a child.

Lee went to Huntingdon College in Montgomery, Alabama, and later transferred to the University of Alabama at Tuscaloosa, according to Biography.com. She moved to New York City in 1949 to pursue her writing dreams, but she struggled to make money and worked as a ticket agent for an airline in order to help pay the bills.

To Kill a Mockingbird was published by Lippincott in July 1960, and Lee won the Pulitzer Prize the following year. But, after the book rose to worldwide fame, Lee purposefully withdrew herself from the public eye. She famously refused interviews and did not publish another book for more than 50 years. She agreed to publish the manuscript of Go Set a Watchman in July 2015, and, though the sequel had been long-awaited by fans, the book wasn't as popular as To Kill a Mockingbird. Still, the sequel was a worldwide bestseller.

To Kill a Mockingbird's lessons will live on past Lee's death. One of the most famous quotes from the book that still applies to the racial divide today is:

You never really understand a person until you consider things from his point of view... Until you climb inside of his skin and walk around in it.

Lee's lessons and writing give most young people their first taste of amazing literature, so there's no doubt that she won't ever really fade from the public eye — To Kill a Mockingbird is just that good.