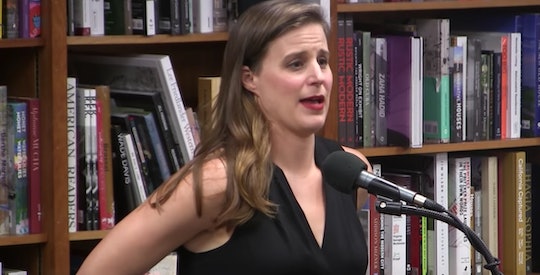 Without fail, it seems as if every successful woman who has also procreated has been asked the same, dreaded question: How do you do it all? As in, how do you manage to fulfill your motherly duties while also spending so much time focused on your career? It's true this question often comes from a well-meaning place. It might be comforting and inspiring to other women struggling with the ever-elusive "work-life balance." Yadda, yadda. Which is great and all, except successful men are rarely asked the same question. So if you've never heard of the name Lauren Groff, allow me to introduce you to how a true feminist shuts down inquiries that are sexist AF. Because author Lauren Groff refused to answer the question all successful working moms are asked — like a true bad*ss.

As SF Gate reported, Groff — a fiction writer of short stories and author several novels, including Fates and Furies — was recently interviewed by The Harvard Gazette. And of course, the infamous question reared its ugly head. Here's a look at precisely how that went down:

Interviewer: "You are a mother of two. In 10 years you have produced three novels and two short-story collections. Can you talk about your process and how you manage work and family?"

Groff: "I understand that this is a question of vital importance to many people, particularly to other mothers who are artists trying to get their work done, and know that I feel for everyone in the struggle. But until I see a male writer asked this question, I’m going to respectfully decline to answer it."

Following the publication of Groff's remarks, the author has pretty much become Twitter's hero overnight. "Lauren Groff politely but firmly says she won't answer questions on how she manages to write books and be a parent until she sees male writers asked the same question," one Twitter user wrote. "If more people did this it would help dismantle the notion that family=women's work." Yasss!

Another person simply tweeted, "Lauren Groff is one badass woman."

Yet another Twitter user wrote, "I’ve never read anything by Lauren Groff but her answer to a sexist interview question makes me want to." (Same.)

Because the dreaded, "How do you do it all — a family and a career?" question comes up again and again for successful mothers, this isn't Groff's first go-around. Not by a long shot. Back in 2016, Groff answered this type of question a bit differently during an interview with The New Yorker — in that she actually entertained it. "I’d made the decision before the boys were born that I was going to feel no guilt or shame about my parenting," she told the publication at the time. "I’m a good mother and want to spend as much time as possible with my kids, but I travel a lot, I shut myself away from my family to work every day, I do not do birthday parties, and I went to one play-date in my life and wanted to break the Perrier bottle on the floor and stab myself with it. We have intense conversations in my house about apportioning responsibility, because neither my husband nor I wants to assume roles based on messed-up collective assumptions about gender dynamics." She continued:

I think that, in our society, the idea of motherhood is pathologically ill, and even well-meaning people assume martyrdom in a mother. Guilt and shame are the tools used to keep people in line; the questions I get most at readings or in interviews are about being a mother and writer, when I’m expected to do this this sort of tap dance of humility that I have no desire or ability to dance. I think people are mostly kind and don’t know that, when they ask these questions of women, they are asking us to perform a kind of ceremonial subjection — that we’re not allowed our achievements without first denigrating ourselves or saying, with a sigh, 'Yes, that’s correct, I’m a writer and a mother, and it’s so hard, and, no, I don’t do it well.' The truth is, doing these things is hard because being a good parent is always hard, but the difficulty of parenting is separate from the difficulty of work.

Of course, Lauren Groff isn't the first person to notice that literally every celebrity woman who also happens to be a mother is asked this same question — while their male counterparts, more often than not, aren't. As Today reported, Jennifer Garner touched on the subject during her "Women in Hollywood" speech back in 2014. At the time, the actress spoke of her then-husband Ben Affleck and the stark contrast between the questions they received during a press junket, Today reported. "I told him every single person who interviewed me — and I mean every single one — asked me, 'How do you balance work and family?'" she said. "[Ben] said the only thing anyone asked him repeatedly was about the tits on the 'Blurred Lines' girl [Emily Ratajkowski]."

Yep, that's right. Exactly zero people asked Affleck how he manages to "do it all" between juggling his time as an actor, a producer, and a father of three. And yet, Garner was repeatedly bombarded with this very question. "And we do share the same family," Garner added. "Isn't it kind of time to change that conversation?"

Can I just say that I'm loving the fact that women are calling interviewers out about this? And can we all somehow agree to "respectfully decline" to answer these sorts of inquiries until it either stops, or until men are asked equally as often? Because Lauren Groff's straightforward answer to what has become a go-to for publications is both respectful and thoughtful — while being exceptionally bad*ss.