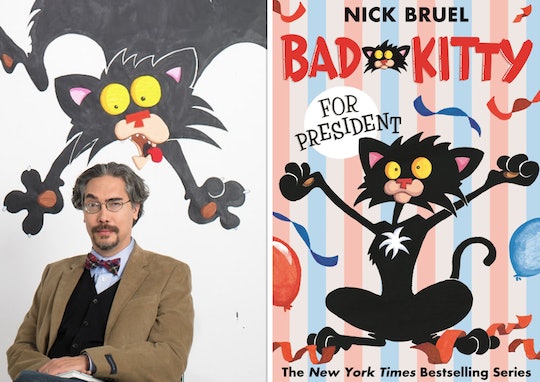 When A Boy, 8, Had Concerns About A Children's Book, The Author Responded Beautifully

Language is a powerful thing, especially in the hands of a child. So when children's book author Nick Bruel responded to a question from one of his young readers about suggested foul language, he used the opportunity to discuss the power and ownership readers have over the words they see and use. Rather than talk censorship, Bruel spoke with the elementary school student about choosing words carefully, especially when we have the ability to hurt others with what we say.

Bruel, the bestselling author and illustrator of the Bad Kitty series, recently received a letter from an 8-year-old boy in the third grade referred to as "L," who expressed concern over the language used in one of his books. Bruel shared both the note and his response on Facebook, explaining to Romper that the child wasn't the first person to express concern, or even outrage, over his use of implied "bad words."

"I am a big fan of your Big Kitty books, but you took it too far in Bad Kitty for President," the 8-year-old wrote. "I saw that this book had the symbols %#@$ twice. And on the back it says [that] it’s for ages 7-10. Did you publish this book for kids by mistake or did you not choose your words wisely?" Adding the sentences and page numbers that contained the suggested curse words, he wrote, "I think you may need to fix those pages. The reason is because %#@$ makes kids think of the bad words and what they really mean in our heads. So, could you locate those parts and please fix them? I would really appreciate that."

Bruel began his response by adding a bit of context to his post — "L's teacher tells me that L has a very challenging home life," he shared — before going on to respond at length to the boy's letter. "Thank you for writing to me and for the very intelligent question," Bruel wrote. "Let’s talk about words. To begin, I’m going to teach you a word you may have never heard before. 'Grawlix.' It’s a great word, isn’t it? Even a lot of grown ups don’t know this word ... [it is] a collection of symbols that take the place of a real word, and the real word could be anything."

For that reason, the implied words that were concerning L could be something as innocuous as "Holy Cow" or "Holy Smokes." Bruel went on to say that he uses a grawlix to let readers choose the words they wish to see: "Some readers will choose an innocent word. Others may choose a 'bad' word. And guess what? I’m okay either way."

While a collection of symbols may seem harmless, Bruel tells Romper that L is only the latest in a string of people to express concern over his use of grawlixes. One parent even went so far as to contact their local media about it, getting one of Bruel's books removed from a third grade reading list. "Beginning about 5 or so years ago, I began getting regular emails from adults protesting my use of the grawlix in a few of my books," he says. "This was odd on a lot of fronts, not the least of which was my surprise that anyone would care."

Bruel has posted such letters and his responses to Facebook before, but he says L's was a bit different — more polite, for one thing. "The distinction, to me, between L's letter and the ones I've received before is that when an adult writes to me about this, it's always from a place of manufactured outrage," he explains. "With L, as it would be for most children, the concern comes from genuine curiosity."

L's teacher, Holly West Foreman, worked with him to get the letter just right. She also shared her take on the experience on Facebook, detailing L's writing process, and tells Romper that the boy put the utmost care into writing it and even spent his lunch hour revising it. "L expressed his concern for the use of the grawlix in Bad Kitty for President out of understanding that children should not be encouraged to use foul language," Foreman says.

When Foreman tried to explain that the grawlix didn't necessarily represent a bad word, L wasn't satisfied. So, they went to the school's principal, Alice Fancher Duett, for guidance, and that's how they came to contact the author directly. Duett tells Romper that she then encouraged L to write Bruel, having heard him give a reading recently she "thought the author would want to hear his concerns." So they did.

"When L understood he could have a voice in this matter," Foreman says, "he enthusiastically went to work."

After touching on what people generally think of as "bad words," such as those bleeped out on the radio, Bruel explained to L that his idea of bad words are those that can be used to hurt people. "Ugly. Weird. Dummy. Stupid. Freak," he wrote. "There are a lot more." These are the words that Bruel wants L to think about. And although L may hear them on occasion, that doesn't mean he has to wield them like weapons. "But if you use them against someone, you can really do some damage," Bruel wrote.

Bruel tells Romper he decided to talk about "bad words" in his response to the young boy because they're a part of a topic he "truly believe[s] in: That words all by themselves are not powerful, but that we give some words incredible power."