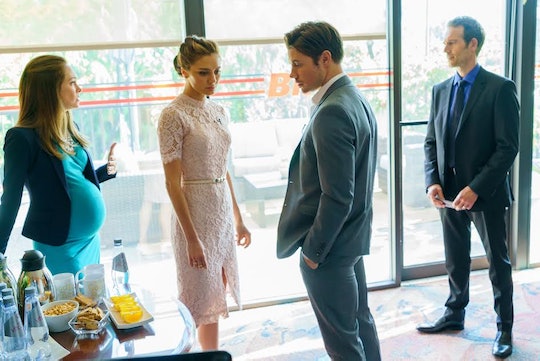 E!'s newest scripted series, The Arrangement, follows the lives of Megan Morrison (Christine Evangelista), a young starlet who's trying to make it in Hollywood, and Kyle West (Josh Henderson), a big movie star who's also a member of the Institute of the Higher Mind. While their love story is the focal point of the show, the side characters also have their own interesting storylines going on. For example, Megan's agent Leslie Bellcamp, played by The OC's Autumn Reeser, is juggling her job while also being very pregnant. During an email conversation with Romper, the actress explained why she loves playing a badass pregnant lady on The Arrangement and her reasoning is pretty perfect.

What's great about Leslie's role on the series is that her pregnancy isn't the only distinguishing factor about her character, at least not in the first episode. Even though she's obviously pregnant, it's not really discussed. Viewers don't even know who the father is by the time the first episode ends. Instead, Leslie is focused on her job, which at this point is to help Megan make the right decisions that will advance her career. It's Leslie's tenacity in her work while being pregnant that really drew Reeser to this role.

"I like the contrast of playing this ball-busting, take-no-prisoners business woman who also happens to be hugely pregnant," Resser says. "That physical character challenge was fun for me to work with."

And Reeser truly nails it. Leslie is straight forward and direct when it comes to her job, while also remember to take care of herself at the same time. It'll be interesting to see how the show continues to handle Leslie's pregnancy in the future. Will fans find out who the father is and will the father show up at some point? Considering how strong and self sufficient Leslie appears to be, I'd say it doesn't really matter. She seems more than capable of tackling any challenge head on, both professionally and personally.

Resser also teased that by the end of the first season Leslie will be "in a state of conflict" about something. "Things do not wrap up in a nice bow for Leslie, Megan or anyone in our story," she says. "We've definitely set the stage for an exciting and dangerous Season 2." I'm already excited to see what this show has in store. It's already clear Leslie will be a scene stealer and her storyline will be interesting to see play out, as well as all the other drama that's sure to unfold.

The Arrangement series premiere airs on Sunday, March 5 at 10 p.m. ET on E!, but you can watch the pilot episode On Demand or E!.