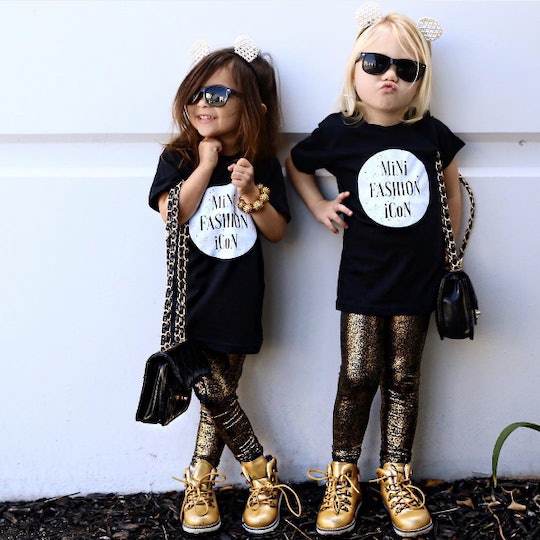 At the tender age of three, many girls are doing one of three things: painting their faces with the magical makeup that their mom carefully applies to her own face, slipping in and out of the dresses that hang in your closet, or making mischief with their BFF. Well, Ava Foley and Everleigh Soutas are doing just that. Only their day-to-day activities have earned them more than 428,000 Instagram followers and deals with multiple retailers Essentially, Ava and Everleigh have become mini style icons for kids and adults alike. (Seriously, just scroll through their Instagram page and you'll find yourself pointing at their outfits saying "Does that come in an adult size?")

So how did two tots who are younger than Instagram become social media stars? They seem to owe their fame to their thrifty moms. In an effort to save some money but keep her daughter on trend, Savannah Soutas took to Instagram to resell her daughter's old clothes. To up the adorable ante of the account, Savannah thought it would be wise to have another child model alongside Everleigh. Enter her own BFF, Michelle Foley.

"We already had the same sense of style and would share secrets on where to get cute clothes," Michele tells Romper during a set visit to zulily, an online retailer that has enlisted Ava and Everleigh to curate five shopping events so fans can shop their fashion-forward looks. But what was mean to be a way to consign their children's clothes quickly evolved into something bigger. After seeing how many "likes" the photos received, Foley began posting children's style tips to accompany the images. Moms and non-moms alike clamored to their page, ForEverandForAva, to get the latest style secrets and see just where the mini-fashionistas were shopping.

Their big break, however, came when Pretty Little Liars star Lucy Hale shared a photo of Ava and Everleigh and commented that the pint-sized stars looked just like her and her bestie Annie Leonard on vacation. After that, the girls' stars began to shine a little brighter. Buzzfeed and Us Weekly featured Ava and Everleigh on their respective sites, and the number of followers began to grow at an even more rapid pace. But Michelle believes it was more than the girls' style or sweet faces that lead to their fame. She says their friendship played a huge part .

"The idea that they're best friends is what took over," she says. In an effort to play up the BFF factor, Michelle and Savannah started to incorporate the hashtag #TagYourBestie into their posts, a social media strategy that played very well with other blonde and brunette besties.

As their girls play hide and seek during our talk, Michelle tells me that she and Savannah never planned for their daughters to become such stars — it just happened. But now that it's happened, the moms are working hard to develop relationships with brands and, above all else, keep fans happy. Savannah says part of that means staying on top of the style game.

"I scroll through Instagram until I see something cute and click on it," she says, noting that she pays attention to tagged brands. Savannah adds that there is some back and forth between her and Michelle on what the girls should wear, but for the most part they share the same sense of style.

"We like the boho look," Michelle says. But, she adds, the girls are just as much trendsetters as they are followers. "If no one is wearing a blazer, they’ll be the ones to wear a blazer. If something's been done too much, we change it up. People go to our page so often that we have to keep it fresh."

But don't think for a second that the moms are the only ones with a say in the outfit choices. Michelle says that both Ava and Everleigh are very verbal about what they like an don't like, even if their vocabulary isn't super strong.

"Ava really likes wearing dresses," Michelle says of her daughter. "If you were to say to her 'do you want to wear this romper or this dress,' she always wears the dress." Even if it causes the occasional temper tantrum, Michelle says, "it’s good to see they’re starting to develop their own sense of style and see what it is they like to wear."

In addition the occasional temper tantrum for their daughters, Michelle and Savannah are also subject to criticisms from strangers who comment on everything from their children's look to their own parenting. Though it can be difficult to deal with at times, Michelle says knowing she has Savannah's support makes it easier to block out the hate.

"It’s hard when people say things like "does your kid have a normal life,'" Michelle says. "But if you can have someone to lean on then it's easier." Another way the moms wade through the hate is to remind themselves that they're doing this for their kids.

"These are memories that they’re going to be able to have when they’re older," she says. "How many kids get the opportunity to have all those pictures of their every moment and for them to actually like it?" Michelle adds that the girls genuinely enjoy getting all dolled up for their photo sessions, as it gives them a chance to spend time with one another. "Ava will wake up and say, "Am I going to see my bestie today,'" Michelle says. "That’s the most important thing — they have fun."

And after spending two days with the girls and their moms, I can attest to the fact that they are more than enjoying their well-deserved time in the spotlight. And whenever that spotlight fades, they'll still have their sense of style and — most importantly — their friendship. What more can you ask for?