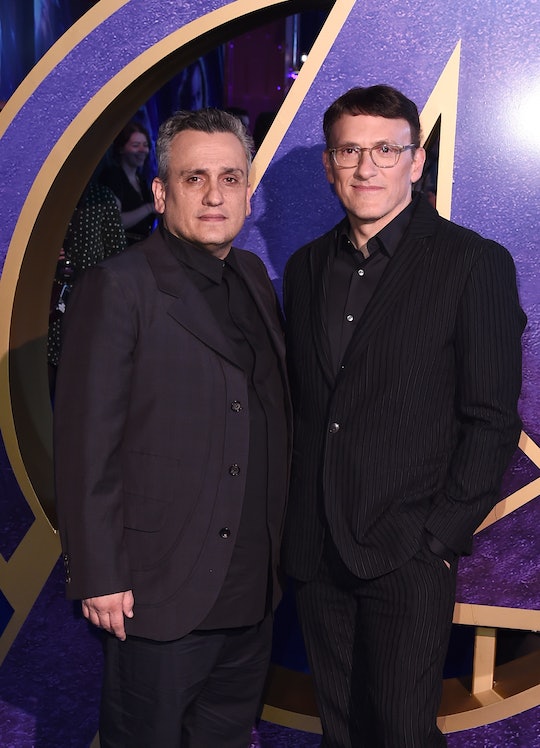 Superhero films are often full of tropes on men and masculinity, like a muscle-clad hero, a damsel in distress, the wimpy sidekick, and more. Avengers: Endgame isn't absent of those things, namely muscles, but it was far more progressive than superhero films of years past, especially in one refreshing way. The movie introduced Marvel's first-ever openly gay character, played by director Anthony Russo's brother and co-director Joe Russo, according to Deadline.

Joe Russo first appeared in Avengers: Endgame in an early scene, as BuzzFeed News reported; although his character is not a superhero, the role left a major impact on viewers. Russo's character in the film can be spotted in an early scene set at a support group for people mourning the loss of loved ones at the hands of Thanos in Avengers: Infinity War. According to BuzzFeed News, the character used male pronouns to recall a date he went on during which he and his suitor got emotional about people they'd lost.

Russo opened up about the importance of the character's inclusion in an interview with Deadline, telling the outlet it was a goal of both him and his brother to include a gay character in at least one of the four Avengers films they worked on together. "Representation is really important," he told Deadline. "It was important to us as we did four of these films, we wanted a gay character somewhere in them."

The Russo brothers co-directed Avengers: Endgame, Avengers: Infinity War, Captain America: The Winter Soldier, and Captain America: Civil War together. Their next film, 21 Bridges, is a major departure from superhero work. IMDb describes the film, which will star Chadwick Boseman, as being about "a disgraced detective in the NYPD" who gets "a shot at redemption."

While the inclusion of a gay character is a major step forward for Marvel, fans are hopeful that they'll one day see a member of the LGBTQ community in a more prominent role in the franchise. Rumors began surfacing that Marvel Studios was working on casting its first openly LGBTQ superhero for The Eternals after The Hashtag Show published a blog claiming Marvel was looking to cast "an actor, 30-49, who 'physically looks like a superhero' for one of the film's leads." That coupled with comments from Marvel Studios president Kevin Feige about inclusion during a publicity tour for Ant Man and the Wasp published by The Hollywood Reporter led to an outpouring of hope from fans. The Playlist later reported that Feige was asked if an LGBTQ hero was in the works, and he said "yes." That hero has not yet been seen, however.

While Marvel fans remain hopeful, especially after seeing Joe's character in Avengers: Endgame, hope is waining for some. In 2017, Tessa Thompson confirmed on Twitter that her character Valkyrie in Thor: Ragnarok was bisexual. She later revealed in an interview with Rolling Stone that the film initially featured a scene confirming the character's sexuality, but it was cut "because it distracted from the scene's vital exposition." Thompson told Rolling Stone that director Taika Waititi "kept it in the film as long as he could," but that it eventually "had to be cut."

Perhaps one day Marvel fans will get the LGBTQ hero they've been waiting for. Either way, even small doses of representation for the community are a refreshing change of pace in these kinds of films, and fans will hopefully see more of it down the line.