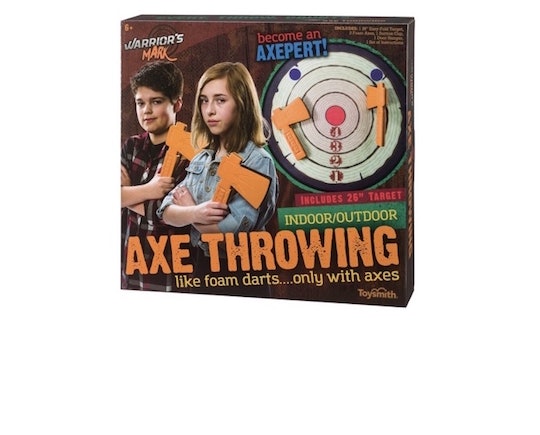 "My child definitely needs an axe-throwing game," said no sane parent ever. Well, until now. The sport of axe throwing has been growing in popularity over recent years, with axe-throwing facilities popping up in many major cities. They've become hotspots for bachelor and bachelorette parties, and there are even leagues forming dedicated to this activity. It's no surprise then that it would make its way into the world of toys. This new axe-throwing game will be your child's new favorite, and I promise it's safer than it sounds.

Washington-based toy company Toysmith, a 37-year veteran of the toy industry, is gearing up to unveil 150 brand new products at New York Toy Fair 2019 later this month. Among those is Warrior’s Mark Axe Throwing, which they described in their press release as "the trend-setting target toy for AXEperts everywhere." The toy, which follows the same concept as traditional axe throwing competitions, is every bit as addicting as darts, though I'd certainly say it requires a bit more skill.

If you want to insert a history lesson into your child's playtime here's some interesting backstory behind axe throwing. In medieval times, the throwing axe was the "weapon of choice" in battle, according to Bullseye Axe Throwing. Because they could be thrown from a distance, throwing axes were a safer option than hand-to-hand combat. Since soldiers obviously didn't want to wing it (since you know, that's never really a good idea in a life or death situation), they worked on their technique and aim during target practice. Today, you can embrace all of the exhilaration but none of the danger with your own axe throwing target practice. Thankfully, your skills won't be tested in battle.

So, how do you play Toysmith's version? The game is made for two or more players, who take turns throwing foam axes at a target. The game comes with a suction cup and door hanger, making the target portable and easy to hang up on different surfaces. The target is marked with four outer rings marked 1, 2, 3, and 4 and a bull's eye that's worth six points, just like a traditional axe throwing target. Each player gets ten throws, and is awarded points for whichever area they hit with the axe "blade" – that is, if they're able to get the axe to stick at all. As the video from TTPM below shows, it's harder than it sounds. After ten throws, the player with the highest score is named the ultimate axepert.

Of course, fellow perfectionists will find that this game is addicting simply because it's tricky. In order for a point to count, the axe blade has to stick to the target just like a real axe would. Your child (and let's be real, you) will likely end up spending hours trying to get your technique just right. Like any of these games, practice makes perfect. The game comes with a handy sheet that demonstrates three different types of throws, so you can find the one that works best for you.

Warrior’s Mark Axe Throwing is available on Amazon for $24.99. The set comes with a 26-inch diameter foldable target, two foam axes, suction cup, door hanger, instructions, and a drawstring storage bag. It is recommended for kids ages 6 and up.