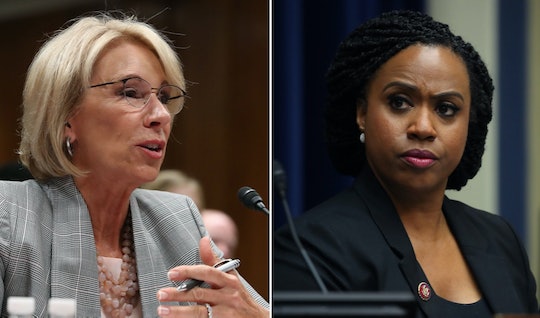 The Trump administration has come under heavy criticism after doubling down on its demand for schools across the country to reopen to full-time, in-person learning this fall despite rising new surges in coronavirus cases. Much of that criticism has been directed at Education Secretary Betsy DeVos, who has repeatedly called for children to return to school and downplayed adherence to health officials' reopening guidance. Most recently, Rep. Ayanna Pressley tore into DeVos' push to reopen schools, saying she wouldn't trust the education secretary to adequately care for even a house plant.

"You have no plan," Pressley wrote Sunday in a tweet to DeVos. "Teachers, kids and parents are fearing for their lives. You point to a private sector that has put profits over people and claimed the lives of thousands of essential workers. I wouldn't trust you to care for a house plant let alone my child."

Pressley's criticism referred specifically to remarks DeVos made during an appearance on CNN's State of The Union. While repeating the Trump administration's call for all schools to fully reopen, DeVos cited YMCAs that have offered child care to frontline workers without seeing "high instances of viral spread." Although DeVos did not elaborate on what she considered to be "high instances" of community spread, it's worth noting that YMCA child care centers have reported confirmed cases of COVID-19, the illness caused by the novel coronavirus.

In Marshfield, Wisconsin, for example, an asymptomatic child being cared for at the Marshfield Clinic Health System YMCA Child Care Center tested positive for COVID-19 in early June, according to the Marshfield News Herald. As a result, part of the center was forced to close and 40 people had to self-quarantine, the news outlet reported. A few weeks later, WJFW reported the YMCA of the Northwoods in nearby Rhinelander, Wisconsin, had closed temporarily after a child care staffer tested positive for COVID-19. And while YMCA centers may not be seeing high rates of infection, hundreds of other child care centers have reported seeing positive COVID-19 cases, including at least 950 children and staff spread across 668 child care locations in Texas, according to the Texas Tribune.

During Sunday's interview with CNN, however, DeVos appeared to suggest that students could be sent back to school with little risk if good hygiene was followed. "It really is a matter of paying attention to good hygiene," DeVos told the news outlet, noting that guidelines around hand washing, face masks, and social distancing should be followed. "What we're saying is that kids need to be back in school and that school leaders across the country need to be making plans to do just that."

While DeVos did concede there were likely to be some exceptions, she stressed reopening schools to full-time in-person learning should be the standard. "There’s going to be the exception to the rule, but the rule should be that kids go back to school this fall," she told CNN. "Where there are little flare-ups or hot spots, that can be dealt with on a school-by-school or a case-by-case basis."

Pressley wasn't the only member of Congress to criticize DeVos for demanding schools reopen without presenting adequate plans on how to do that. Rep. Joe Kennedy III accused the education secretary of being willing to "threaten" students and teachers' health for political gain. "For nearly four years, Secretary DeVos has demonstrated a consistent, callous disregard for our nation's public school students and teachers," he tweeted Monday. "Her most recent threat to withhold funding plainly reveals that she is willing to threaten their health for political gain."

Sen. Maggie Hassan also spoke out against DeVos' threats to withhold federal funding from schools that do not reopen, arguing in a tweet Monday that "schools need guidance and resources — not threats." Echoing criticism over DeVos' lack of a plan for reopening schools safely, Sen. Kamala Harris tweeted that the education secretary's "lack of leadership on how to safely resume schools is dangerous to our students, our teachers, and our staff."

Despite the Trump administration's concerted efforts to push schools to reopen full-time in the fall, many school districts have announced plans to continue to rely on remote learning in some way. In Southern California, both the Los Angeles Unified School District and the San Diego Unified School District has announced plans to rely solely on virtual learning at the start of the school year, CBS News reported. In Virginia, CNN reported that Fairfax County schools offered parents a choice between all-virtual learning and a hybrid learning model that included two days of in-person instruction.

Meanwhile, parents and teachers have their own concerns about how reopening schools will ultimately work.