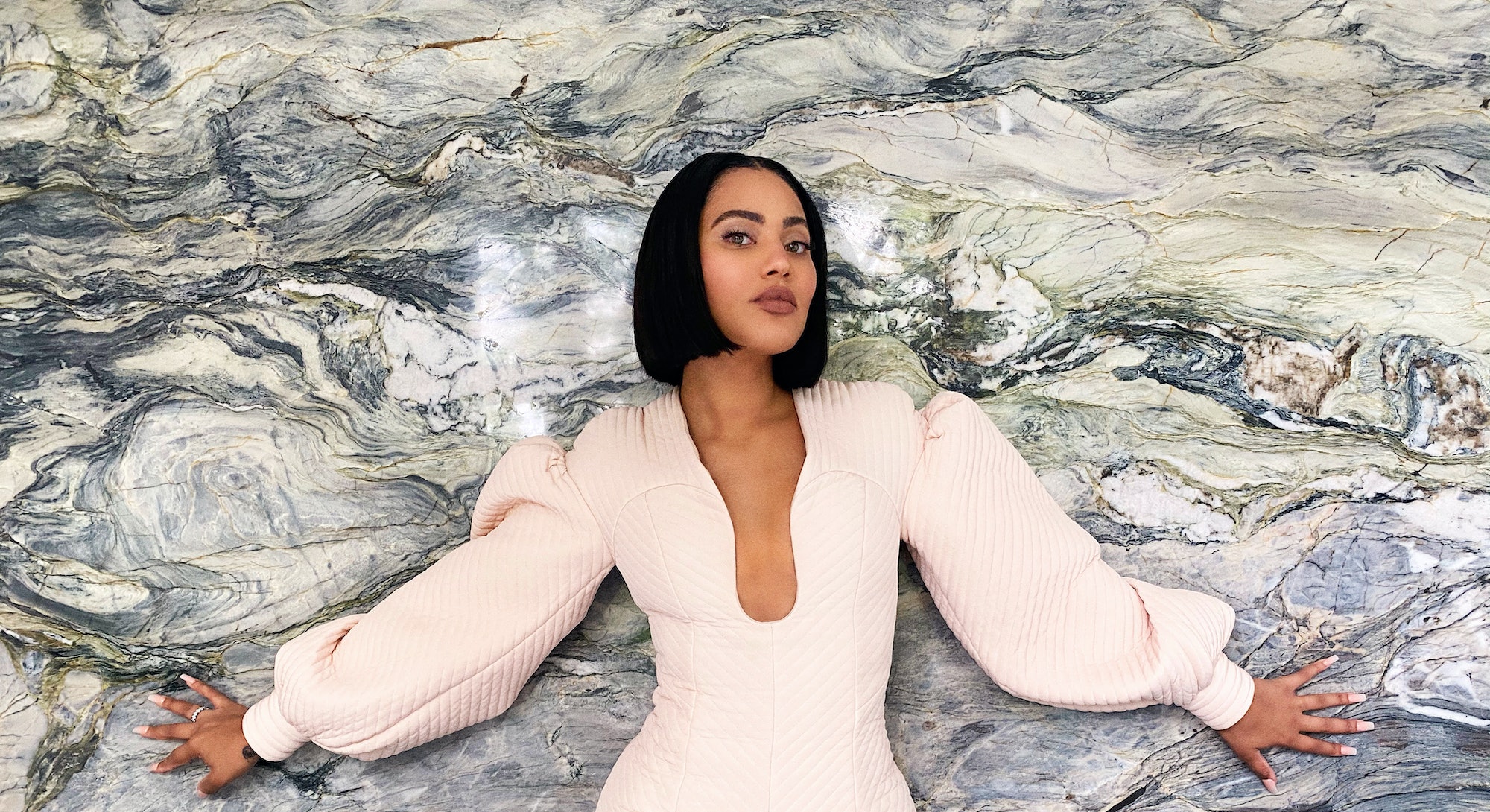 Ayesha Curry Brings It All To The Table

Ayesha Curry takes her phone calls from the same place everyone does these days: her bedroom, hiding from her kids. “It’s the quietest spot in the house,” she says, noting that her youngest hasn’t gone down for his nap yet. Well into lunchtime, all she’s managed to eat for the day are vitamins and a cup of coffee. “Everything's just been so tumultuous and chaotic and unpredictable that I can't say I've gotten into any sort of rhythm.” All of which makes the double-meaning of her new cookbook’s title, The Full Plate, extremely fitting.

“I'm very content right now with what I have,” says Curry, whose full plate currently includes not just her three children (ages 8, 5, and 2) and the cookbook’s recent launch but also advocating against childhood hunger and launching a new business. “The goal is to just make sure that I'm staying innovative and keeping up with what I already have.”

Which is a restaurant group (she co-owns International Smoke with chef Michael Mina), a few food television shows, and her first cookbook. But since The Seasoned Life came out four years ago, she gave birth to a third child — and a new philosophy about cooking, as telegraphed by The Full Plate’s subtitle: “flavor-filled, easy recipes for families with no time and a lot to do.”

I really make a point to sit down for dinner and check in with the kids and pick their brains a little bit.

“Time is precious,” Curry says, and not only does she have less of it these days, the scarcity illuminates the importance of cooking of a meal quickly so that she and her husband have more time to sit down at the table with the kids, 8-year-old Riley, 5-year-old Ryan, and Canon, who is now 2. “It's super relaxing and probably one of my favorite parts of each day.”

In the new cookbook, she keeps prep time to a minimum — no elaborate techniques, just what's needed to make a great meal — and fret time even shorter, assuring readers not to worry if they don’t have an ingredient. Instead, she encourages them to have fun, make substitutions, and rediscover their creativity, which you have to do generally when you have three kids. “It's a perfect reflection of where I am right now in life.”

Not the hiding in the bedroom part, of course, but rather making up for those breakfasts lost in hectic days by cherishing dinners, often sticking to the motto she offers at the beginning of the book: “When in doubt, carb it out.” She keeps the book’s pastas, like Crab Bucatini and Mommy Mac and Cheese, in heavy rotation. But what’s on the table is secondary: “I really make a point to sit down for dinner and check in with the kids and pick their brains a little bit.”

Though she considers brown sugar her secret ingredient — “It has that layer of burnt molasses in it, and there's just something that changes the dish, especially when it comes to sauces and glazes” — nothing gets sugarcoated once the Curry family is talking around the the table. When Riley asks about the Black Lives Matter movement, Curry wants to make sure her older daughter understands what’s happening. “I truly believe that’s the first step to change.”

When in doubt, carb it out.

Curry sees discussions with her own children and with everyone else as part of her role in the movement. “I didn't realize how many people just didn't know what was going on,” she says, encouraging anyone who reads this to remember that even the smallest actions are important. “So educate your neighbor. Educate your friends,” she implores. But she also ties the root of the movement to where she focuses her own advocacy work: ending childhood hunger, including through Eat. Learn. Play., the foundation she started with her husband, NBA star Stephen Curry.

Curry sees the role of food in activism and advocacy like an octopus with multiple legs working in various ways — communication, change, and togetherness, among other things. “Just getting your family around the table, you find that your child's education is better because they can focus better in school,” she says. “And having those conversations at the table broadens their vocabulary.” For Curry’s kids, that’s not just in one language: She jokes that after spending time with extended family, Canon speaks Jamaican Patois better than she does.

“Stephen is a good old Southern boy,” she says, but even he seems to think he’s Jamaican by marriage now. Perhaps it comes from taste-testing recipes from The Full Plate, where she lets her roots show in dishes like the Island Punch cocktail, Jamaican Pea Soup With Spinners, and Caribbean Lobster Rolls. But she also brought a lesser-known side of her ancestry to the book: her mother’s Chinese heritage. “There's a huge Asian Jamaican community,” she explains, which influenced her own upbringing and she reflects into many recipes, like her “reloaded” version of Rasta Pasta that includes soy sauce.

In her next big project, Curry keeps her ties to the Caribbean in focus: a forthcoming skin care line that uses natural ingredients found in Jamaica — “from the land.” She laughs, “So, right back to food. [It’s] food for your skin.”

Still, she hopes to someday bring even more of her heritage to a cookbook. Curry seems to almost audibly blush as she describes her dream project. “I can’t believe I’m saying this,” she whispers, as if speaking it aloud somehow jinxes it: a Jamaican cookbook filled with everything she’s learned from her aunties, great-aunts, mom, cousins, and friends’ moms. “To put that in one place and have this statement of culture and heritage that I can pass down to my kids…” She sighs, describing oxtail and butter beans, multiple variations of rice and peas, and vegan versions of meaty classics like curry goat and stew chicken. “I feel like it's something I'm going to do, even if it never gets published. I want to have that tangible book of recipes.”