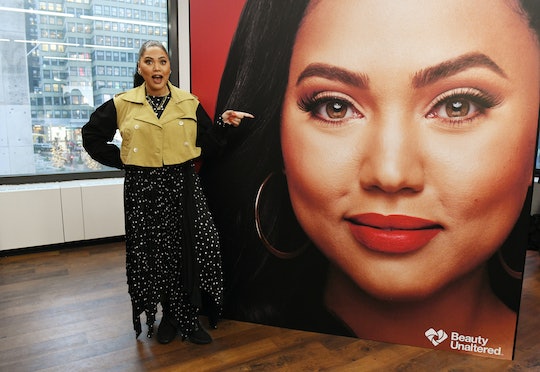 Apparently, a few folks in the interwebs took issue with Ayesha Curry’s comments about a lack of male attention as a mom on the latest episode of Red Table Talk, hosted by Jada Pinkett Smith.

"Something that really bothers me and has honestly given me a little bit of an insecurity is the fact that, yeah, there are all these women throwing themselves [at her husband Stephen Curry], but me, like the past 10 years, like, I don’t have any of that," she told Pinkett Smith, as The Root noted. "Like I have zero, this sounds weird, but like, male attention. And so then I begin to internalize it, like is something wrong with me?... I don’t want it, but like, it’d be nice to know that… someone’s looking.”

Very briefly, the cookbook author and actress, who is married to NBA player Stephen Curry, admitted to ~some~ insecurity from time to time. And folks flocked to the comments section with variations on “Ugh, how dare she be human, the attention from her husband should be enough.”

In full transparency, most of the haters were cis-het dudes and the kind of women that say things like “I don’t hang out with females, I prefer dudes cause women are too much drama,” as though men aren’t all problems (lol).

Most folks have the sense to see there’s nothing wrong with a woman — particularly a Black woman — taking the time to be vulnerable in a society that hardly gives us the opportunity to express anything other than strength.

But if you’ve ever been in a long-term relationship, especially one where your partner travels often, you know that preoccupation with a kids and lack of attention can make you wonder if you’ve still got it.

From here forward, I stan Ayesha. Not because she’s been working hard to build an empire alongside a celebrity husband. And not even because she’s talked openly about postpartum bodies, mental health, and relationships. But because she spoke out about feeling what ALL women have felt at some time in their life: self-doubt.

I know what’s she describing all too well.

Being one of few Black girls in an overwhelming white place can do a number on your self-esteem, and when you’re already in a period of transition and battling post-baby body dysmorphia, it’s heightened.

Over the last few years, I’ve shifted from being a hot college girl who was overwhelmed with “but can you have friends” comments, to being lucky if I got a double-take.

Back then, the confidence that radiated off me could have powered a small town. And when you’re that confident, people notice.

Five years out of school and five years into marriage, having pushed out two kids and moved to the Midwest, things are different. Everything around me is white — both the people and the constant snow — and I’m not seen as the sought-after hot girl that first caught my husband’s attention.

I held it together for a while after the first kid. But now that we have two, it's over.

My clothes are bedazzled with a mix of baby vomit and dog hair. And on my best day I’m shocked if a single person acknowledges my existence, let alone finds me attractive.

It wasn’t a big deal at first. But after the months turned into years, I started to question what the lack of attention meant about who I was. Being one of few Black girls in an overwhelming white place can do a number on your self-esteem, and when you’re already in a period of transition and battling post-baby body dysmorphia, it’s heightened.

But it’s not just me. And it’s so much deeper than race.

We all have that THING that leaves us feeling undesired. I had two: a cross-country move and motherhood.

If you don’t know what Ayesha is talking about, you haven’t lived.

Curry’s realness highlights the ways that the changes that accompany spouse and motherhood can slowly chip away at your sense of self — particularly as a mom.

You’ve probably never been a mother who looks a lil too close to a muffin after you dare to slide into your pre-baby jeans.

You haven’t moved and dealt with the isolation that comes with being the only one who looks like you in a new area.

And you definitely haven’t gone from feeling like you were a triple treat to someone who functions mainly as a support figure to a house full of people.

For me, the biggest irony of all of this is that a society that functions on likes and loves has the audacity to pretend like others' approval doesn’t impact the way we see ourselves.

We live in a world that suggests women’s value is directly correlated to the male gaze, but act surprised when we question our value in its absence.

Curry’s realness highlights the ways that the changes that accompany spouse and motherhood can slowly chip away at your sense of self — particularly as a mom. Everything that you know about your body — and your beauty — will shift post-baby.

It’s our life’s charge to get to a level where our sense of self love functions independently of others' opinions. But it’s a process and it’s hard to make time for that kind of self-work when you married young and are responsible for the physical and emotional health of multiple small humans.

And that’s nothing to apologize for.