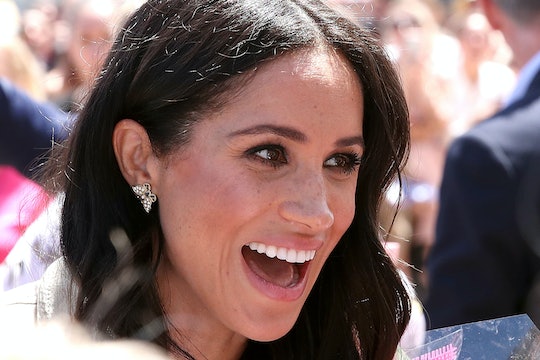 Giving birth on the same day the royal baby is born may not seem like much of a win, but it could be. In fact, babies born on the same day as Meghan Markle's baby can get free "royal portraits" done and can enter for a chance to win $10,000, thanks to a new giveaway from Pure Leaf. Sure, your special day might be outshined a bit by the celebration of Baby Sussex, but with a regal painting of yourself and all that money in the bank, who cares?

Pure Leaf recently welcomed a new baby of sorts of its own — a new line of herbal iced teas. According to a company press release, American families with babies born on the same day as Markle and Prince Harry's son or daughter will be treated to a private portrait session with a world renowned photographer, though the name of that photographer hasn't been revealed yet. One of those families will be selected to win a $10,000 cash prize, too.

Entering is easy. According to Pure Leaf, all you have to do is post a picture announcing the birth of your baby on Instagram or Twitter with the hashtag #PureLeafRoyalTEASweepstakes and tag @PureLeaf. The company will then go through the entries and reward new parents accordingly.

While not everyone can win the big cash prize, Pure Leaf will be rewarding 50 runner-up entrants with $100 gift cards to Shutterfly to create their own royal birth announcements.

In the meantime, Markle and Prince Harry are preparing for the birth of their first child. The royal baby is due any day now, according to Town & Country, but shouldn't expect as much fanfare from the couple as with previous royal babies.

Buckingham Palace released a statement on Thursday, according to The Cut, stating that the couple would like to celebrate their son or daughter's arrival privately. The couple said in the statement that they are grateful to their supportive fans, however.

"The Duke and Duchess of Sussex are very grateful for the goodwill they have received from people throughout the United Kingdom and around the world as they prepare to welcome their baby," the statement said. "Their Royal Highnesses have taken a personal decision to keep the plans around the arrival of their baby private. The Duke and Duchess look forward to sharing the exciting news with everyone once they have had an opportunity to celebrate privately as a new family."

According to Vanity Fair, the Duchess of Sussex doesn't intend to step out for a photo opportunity with the royal baby when he or she arrives like Kate Middleton did with her three children. The former Suits star was reportedly "uncomfortable" with the idea, according to Vanity Fair, and a palace source said Markle and Prince Harry will pose for a photo once the royal baby has arrived and they feel ready to do so.

"It will probably be within a few days of the birth, but there is no time limit," the source told the magazine. "It will depend on how the birth goes and how the Duchess is feeling."

Fans should expect an official announcement when Markle goes into labor, according to People, and another will follow when the child has been born.

Fans may not get to see the royal baby immediately, but you could alway comb through Pure Leaf's giveaway hashtag for cute babies in the meantime. It's unclear how Markle and Prince Harry's private delivery will affect the outcome of the contest. You'll just have to wait and see what happens when the baby makes his or her way into the world.

Until then, though, get ready to snap your cutest birth announcement photos. After all, a picture is worth a thousand words and, in this case, potentially $10,000.

Editor's Note: This article's headline has been updated.

More Like This
Alec & Hilaria Baldwin Welcome Baby #7, And Revealed Her Cheerful Name
Lindsay Lohan Channels Meredith Blake In Her New Christmas Rom-Com
Post Malone Shared A Bunch Of Sweet & Candid Details About Life With His 4-Month-Old Daughter
Kate Middleton Shares Her Kids' Sweet, Yet Honest Reaction To Seeing Old Photos Of Her