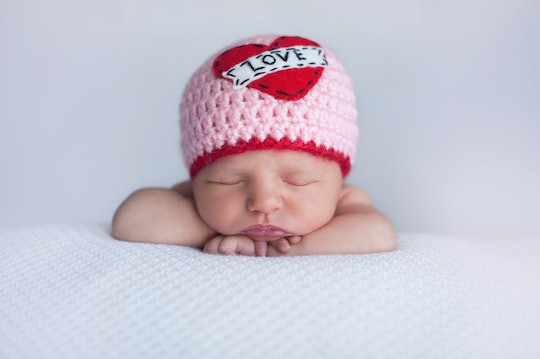 Love it or hate it, Valentine's Day approaches. For most who celebrate, it's a highly commodified, compulsory romantic holiday whose origins are somewhat suspect. But it turns out, the holiday has a surprisingly rich, dark history, and with history comes superstition. Take for example the happenstance of your baby's birth around the holiday of love. What does it mean if babies are born on Valentine's Day other than the fact that getting a reservation on your birthday will be nigh impossible?

Being born on Valentine's Day, according to modern western astrology, makes the baby a firm Aquarius. This puts the baby firmly in the camp of philanthropist and peacemaker, according to Astrology.com. Western astrologers believe that those born under Aquarius, by their very nature, are a more giving group of people than those born to the other signs. They have a tendency to settle arguments with reason and logic instead of brute force. However, they look for balance in the scales of justice and will fight for the right side even if the cost appears dire. Being born on Valentine's Day, according to astrology website Quarto Knows, makes you the quintessential aquarian, ready to build a happy, just, and peaceful community.

If you look at the origins of the holiday, you might be surprised that a peaceful, philanthropic persona is the association made. According to a story on National Public Radio, Saint Valentine's Day began as an early Christian response to the raucous Roman party season of Lupercalia. This was an out-of-control holiday that consisted of three days of public nudity, sex, and ritual whippings. Women would line up to be beaten across their nude backsides with leather straps because they thought it would make them more fertile. If ever Christian Grey had his own holiday to celebrate leather and dubious consent via coercion, this was it.

However, after these public drunken beatings were complete, the couples that found favor in one another went off to whatever the Roman equivalent of a no-tell motel for a period of time to get to the baby making made possible by the butt whipping. When one of a possible two early Christians (both named Valentine) advocated for marriage over mayhem some time in the third century, the emperor executed them, therefore making them martyrs, and the Catholic church elevated them to sainthood (possibly) — as The New York Times reported, it's all a bit sketchy.

This combination of the blessed union of marriage somehow fused with the bacchanal celebration of Rome and gave us Cupid's bow and pricey roses.

What does it mean to be born on Valentine's Day given the dubious origins? It is presupposed that your baby will be more loving and caring, and more generous and true than those born at other points of the year, according to Go To Horoscope.

Strangely enough, I couldn't find a superstition about those born during the period of festivity in ancient Rome. They were so focused on getting pregnant that the babies born were almost an afterthought. Also, let's be honest, it's ancient Rome. Getting pregnant is at least partly the work of virile man and having a baby is the work of women. Such efforts are given anemic written records unless it is to tell of our shortcomings and failures in that arena. But when a man successfully impregnates his partner after swatting her with leather whips and then going off to war? He's a hero.

The most likely scenario for babies born on Valentine's Day is that someone will inevitably ask if you're going to name them Valentine or bring them heart balloons. It also means that your celebratory champagne might cost a bit more than you were hoping. As for how loving your child will be? Only time will tell.

More Like This
5 Superstitions About Babies Born On Valentine’s Day
Celebrate Your Baby’s 1st Valentine’s Day With These Instagram Captions
40 Valentine's Day Outfits Your Girls Will Adore Showing Off This Season
Tips to Beat Jet Lag, For You & Your Kids
What Parents Are Talking About — Delivered Straight To Your Inbox