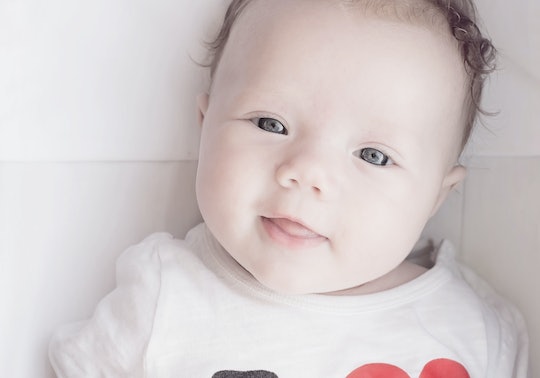 For some reason, a common misconception about babies has been that they, like dogs, can only see in black and white. However, recent research suggests that that might not be as true as once thought. Not only can dogs see more than just black and white, babies too are now thought to have a more competent vision set than adult's tend to assume. According to a recent report by The Guardian, babies can see bright colors, and not just in black and white.

The report, based on research from a PhD student in the baby lab at the University of Sussex, Alice Skelton, looks at how babies recognize and differentiate between colors. In tests with one specific baby in the study, Teo, Skelton found that he was able to discern colors from black and white variables.

Here's how the test itself worked: A camera was used to monitor Teo's eye movement while he looked at a screen featuring blobs of color and larger portions of gray. At 4 months old, Teo was the perfect test subject for a study designed to understand how babies' visions transition from birth — when their vision remains at 5 percent of what adults perceive — to 6 months, when it's understood that a baby's vision is almost as acute as that of an adult's.

As the study indicates, "while a just-born baby has about 5 percent of an adult’s visual acuity, 6-month-old babies have pretty much the same visual acuity as adults do." However, that doesn't mean that all babies can see all colors. As such, a baby's ability to tell the difference between colors is something that is acquired with age. "By two months, babies can tell red and green colours apart; a few weeks later, they can also tell apart blues and yellows. But the colours need to be strong," the research indicated.

A separate study, at Radboud University in the Netherlands, looked at the vision of 9-month-old babies, where Asifa Majid explained that the babies were able to tell different colors apart. "You can see that infants look more quickly towards a coloured dot when it comes from a different colour category," she said, indicating that babies can, in a sense, understand different color categories.

Basically, this new research shows that baby's vision progresses much faster than originally thought, and that they might be able to discern more visually than you might assume. However, it's more likely that your baby will be able to see brighter colors than washed-up shades, according to the report, so break out all your brights! Your baby just might see them.