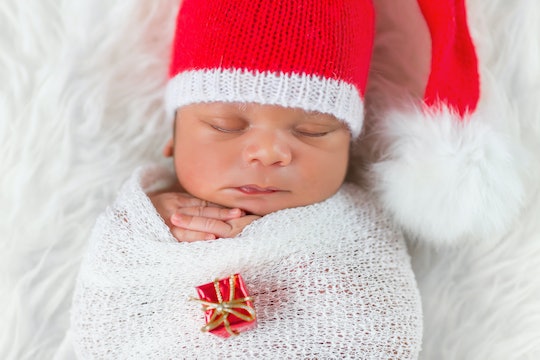 Apparently, There Are Major Benefits For Babies Conceived on Christmas Or New Year's

Hoping to conceive during the holiday season? You'll be happy to know that science records some powerful benefits for children born nine months after the most wonderful time of the year. Pregnancies conceived over Christmas are healthier, and statistically speaking, a new study showed that babies born nine months later are more likely to be ready for school when kindergarten comes around. Babies conceived on Christmas or New Year's have these benefits, and while every child and every pregnancy is different, the research is pretty impressive.

Did you know that the most common birthday is Sept. 16? A whopping 9 percent of all babies are conceived when the weather is cold and spirits are high — in the month of December, of course. Conversely, August shows the fewest conceptions of the year, possibly because parents are outside enjoying the summer weather and not indoors, snuggling — over twice as many condoms are sold the week before Christmas, reported The Daily Beast.

However, parents-to-be should keep in mind that the studies presented are statistical, which means they examine large sets of data for trends and can't (and indeed, shouldn't) be used to predict the success or health of your individual child. Nevertheless, the findings are pretty interesting, especially for couples planning to be swept up in the celebratory spirit.

According to a University of Toronto and Northwestern study recently reported on by TLC, babies born in September are more successful in their academic careers than children born in other months. Skeptical? Here's how the study worked: researchers examined data from 1 million children born in Florida between 1994 and 2000, including college acceptance rates, test scores, and juvenile detention records. In Florida, as in many other states, the kindergarten cut-off date is Sept. 1, meaning babies with a September birthday start kindergarten at an older age than babies born when summer is still in full swing. Essentially, kids that start school later benefit from their maturity their whole life long.

As evidence mounts in favor of children starting school later, increasing numbers of parents are "redshirting" their children, or "delaying a child’s school entry until they can develop further," according to the study's authors. The advantage of the September birthday is all about school starting age and cognitive development.

As for health, a study of 270,000 pregnancies between 2004 and 2009 showed pregnancies started in December resulted in the highest birth rates, as The Huffington Post reported. Dr. Paul Winchester, who conducted the research, accounted for the increase in healthy births this way: moms who give birth in September are exposed to more sunshine late in their pregnancies, a time when vitamin D plays a crucial role. In essence, conceiving in the midst of winter means more healthy sunshine for your baby when they need it most.

If you've been trying to conceive all year without success, there's reason to feel optimistic about the holidays. According to The Atlantic, more Americans conceive on Christmas Eve than any other day of the year, resulting in that super-common Sept. 16 birthday. Just don't worry too much about how the figgy pudding turns out if you want to maximize your chances of a Christmas miracle. A study reported in Science Daily showed that women are 40 percent less likely to conceive when stressed, so be sure to take it easy by the fire while dreaming about your September baby-to-be.