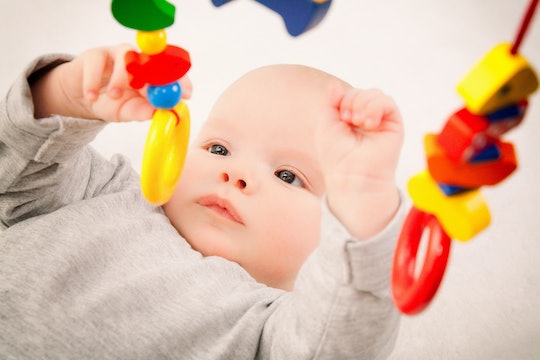 Researchers are finally catching on to something that parents have instinctively known for ages: babies know way more than they can tell us. Just how much more? Well, studies have already proven that even newborn babies show a preference for do-gooders over bad guys — and that when babies see people doing the wrong thing, they expect them to be punished. But, in a new study published this month in the journal Cognition, researchers at the Yale Infant Cognition Center proved that, while babies avoid dealing with bad people in general, like the rest of us, that moral aversion can be overcome if the payoff is big enough.

The idea of babies having a basic moral code is a pretty fascinating concept. We know that, for the most part, human beings like things to be fair: they like to see good people rewarded and bad people punished. But, until recently, it was assumed that our sense of right and wrong was learned. Speaking to CBS correspondent Leslie Stahl in 2012, Yale psychologist and YICC Director Karen Wynn said that, until a new study, most research assumed humans were born as blank slates ready to be taught a sense of morality, or — going even further back in the study of human thinking — that people were inherently lawless and selfish, needing to be taught right from wrong.

According to a report in the Washington Post, assumptions about babies’ sense of morality began to change as developmental and cognitive research uncovered that even the youngest children can show an aversion for wrongdoers, choosing to share with them less and help them less often, and expecting others to do the same. But this new study explored the question of whether those instincts can be overcome and at what cost.

And it takes quite a big bribe to get most babies to set aside their basic sense of morality, according to Yale researchers. In their experiment, researchers at the Yale Infant Cognition Center started by asking 160 children between the ages of 5 and 8 to choose whether to accept stickers from a fictional character offering just one sticker, or a second character offering two, four, or eight stickers. Surprising no one, the kids chose the character offering the most. But when the kids were told that the first character was nice and the second character had hurt someone on the playground, something changed: the kids showed a preference for accepting the gift from the nice character, even though the offer was smaller. Only those who were offered a really high payoff — 16 stickers — were persuaded to deal with the wrongdoer.

According to the Post, the researchers needed to overcome the possibility that the kids were making choices to earn approval from the adult experimenters. They needed a totally unvarnished perspective. And which kids are known for giving zero cares for what others think of them? Babies.

So, the experimenters asked 80 babies age 1 and under to consider two puppets: one offering a single graham cracker and a second offering two or eight crackers. Just like the big kids, the babies opted for the bigger haul. But when the babies were shown a quick puppet show beforehand — with the second puppet seen hurting or being mean to the first — their choices changed. The infants chose a single cracker from the “nice” puppet over two crackers from the “mean” one, except when the mean puppet offered the huge gift of eight crackers — only then were the babies persuaded to make a deal with the devil.

The Post reported that researchers couldn’t conclude whether the babies thought of the bigger payoffs as just a great deal or as some sort of apology or retribution. Still, it’s fascinating to think that babies are capable of making these kind of judgments. Sure, looking at their adorable little faces, it’s pretty clear that babies are taking in their surroundings all the time. But the idea that even the tiniest humans can be driven by — or tempted to abandon — their moral codes is groundbreaking. They may not be able to talk much, but it turns out that babies are just as eager to do the right thing as the rest of us.