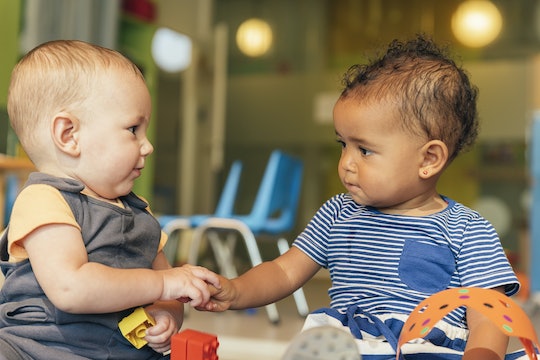 Babies Really Like Hearing The Voices Of Other Babies, So Apparently Kids Are Born To Ignore Us

Every time there's an infant in the room, it seems that at least half of the adults present devolve into "baby talk," that high-pitched, sing-song and babbling that attempts to mimic the sounds infants make. Well, try all you like, grownups, but your attempts are futile: babies really like hearing the voices of other babies, it seems, and they're not being fooled by your impersonations. This is according to research by Linda Polka, a professor at McGill University, who will be presenting her findings at the 175th Meeting of the Acoustical Society of America this week in Minneapolis, Minnesota.

Polka teamed up with Lucie Ménard, a linguistics professor at the University of Quebec in Montreal, and doctoral student Matthew Masapollo to conduct experiments on 5-month-old babies, according to Science Daily. By using a synthesizer that simulates movements of the mouth, tongue, and vocal cords, they were able to produce vowel sounds that mimicked human voices. The subjects displayed a clear preference for the synthetic baby voices than the adult ones, listening to the former for 40 percent longer, on average. Parents of older children know all too well that kids would rather listen to their friends than their parents, but who knew that it started this early?

The really interesting part about this is that the study was performed on babies who hadn't yet started to babble, meaning that their attraction to the baby voices wasn't due to familiarity. Generally, babies tend to prefer that which they're familiar with, but the subjects in Polka's study had never made "ba ba ba" sounds themselves, and yet they still preferred to hear it in a voice similar to their own, rather than one similar to their mom's. This was determined by seating the babies in front of a screen with a neutral checkerboard pattern on it, which babies could choose to look away from to turn off the sounds, or look back to turn them on again.

But what is it about other babies' voices that's so interesting? Most adults would probably assume it's the pitch, which is why so many of us tend to raise our own voices by an octave or two when speaking to little ones (and animals, for some reason, who don't talk at all). But that's not the case, the researchers found. Even after adjusting the adult female voice to a higher frequency, and the baby voice to a lower one, the subjects still preferred the simulated baby's vocal resonance, something parents, with their big mouths, just can't recreate.

So why are babies so fascinated with each other? Parenting put that question to a couple of experts, who each had their own theories. Gary Levy, Ph.D., a research professor in family and consumer studies at the University of Utah, in Salt Lake City, suggested it's because babies tend to have pretty generic faces: "Most babies' faces have features with few extremes as compared to adult faces," he explained. Meanwhile, pediatrician George Askew, M.D. thought it might have something to do with the fact that babies are cute, an evolutionary trait that's thought to encourage adults to care for them. "All young animals with this disproportionate ratio of large head to smaller body -- puppies and bear cubs, as well as humans -- are found to be irresistibly attractive," Askew said.

But both of those theories only focus on their faces. If the babies in Polka's study weren't familiar with the concept of babies making sounds, and they were looking at a checkerboard pattern, how did they even know that the voices they were listening to were supposed to be babies? It might be that they're learning from them, similar to the way that babies will engage in "parallel play," copying each other's actions without actually engaging. "Babies typically vocalize when they are alone, without any interaction or eye contact with others," Polka explained in a McGill press release. "That's because to learn how to speak babies need to spend lots of time moving their mouths and vocal cords to understand the kind of sounds they can make themselves. They need, quite literally, to 'find their own voice.'" Perhaps other babies can help show them the way.