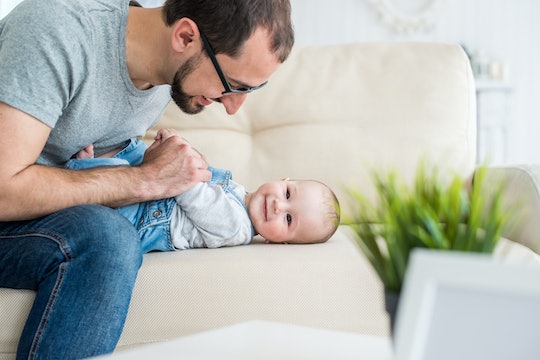 Fathers can play an important role in raising their children, meaning everyone is better off when they're able to be around. When parents are separated, children can miss out on quality time with one or both of them. But babies whose parents are separated might be healthier if they look like their dads, according to a recent study. When fathers perceive a resemblance between themselves and their children, they are more active in the parenting process and kids reap the benefits.

Researchers at Michigan State University found that when a baby lives with their mother, fathers who believe that their offspring looks like them spend more time with the infant in the first year of life, according to The Wall Street Journal. Those children who had more time with dad were healthier by their first birthday when compared to those whose fathers didn't see a resemblance.

The study, which was published in the Journal of Health Economics in January, examined data from the Fragile Families and Child Wellbeing Study between the years of 1998 and 2000. Researchers focused on 715 families where newborns lived exclusively with their mothers. They reported that fathers who saw their child as resembling them spent an average of two-and-a-half more days a month with their child than those who did not, according to Science Direct. Those added days together led to fewer emergency room visits and fewer cases of asthma and illness. Researchers reported babies in the first group as being 10 to 25 percent healthier one year after birth than those who had less time with their fathers.

Professor Solomon Polachek of the State University of New York at Binghamton, one of two lead researchers involved in the study, told The Wall Street Journal that "Fathers are important in raising a child, and it manifests itself in the health of the child."

It has long been understood that fathers (in parent pairs with fathers) are crucial to child development, and not just in medical health. Recent studies have been diving into just how they impact their children's wellbeing. Other recent findings from Michigan State University point to fathers as intrinsic to language and cognitive growth during toddlerhood and social skills in elementary school.

Fathers in the first study did more than just spend time with their children when they saw a resemblance. They also took on more parental responsibility and provided more support, financial and otherwise. All of this contributed to happier, healthier babies.

This isn't the first study to suggest that fathers are more invested in their babies if they perceive a resemblance — and there might be an evolutionary reason for that. Babies, in general, tend to resemble their fathers more so than their mothers, according to two studies examined by The New York Times. The first, a 1995 study published in Nature, had 122 people match photos of children with a pair of people they assumed were their parents. The guesses were correct roughly half the time when it came to children and their fathers, but much lower for mothers.

A similar study from 2003, published in Evolution and Human Behavior, morphed photos of people into babies without their knowledge. They then presented the photos to the subjects. The male participants in the study indicated that they would be more likely to adopt or spend time with the digitally generated babies, male or female, who looked more like them, according to the Times. The resemblance is explained as a sort of natural paternity test for fathers who can't be as sure of their relation to a child as mothers can. Dr. Polachek stated that when a father sees a resemblance, they "are more certain if the baby is his."

Overall, there have been fewer parent-child studies that examined the role of the father versus the mother, according to Psychology Today. And those that did discuss paternal influence, did so based on mothers' reporting. Studies like that of Polachek's and his colleagues' are a step in the right direction for shedding light on the importance of involved fathers; the health of their children depends on it.

More Like This
Experts Explain Whether It’s Safe For Your Baby To Sleep On Your Chest
The Difference Between The PICU & The NICU
Can You Mix Breast Milk & Formula? Experts Weigh In
Here’s Your Guide To Paced Bottle Feeding