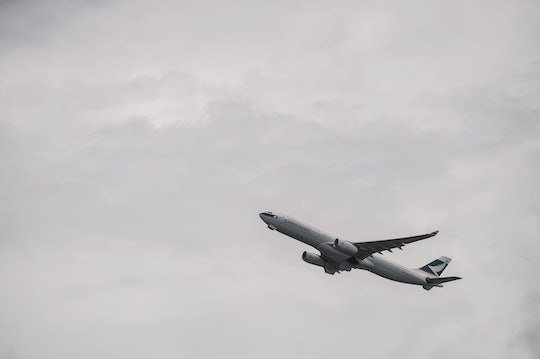 Baby Born Mid-Flight Gets 1 Million Airline Miles, & Will Have The Best School Vacations

Now that's some incredible inflight service: not only was a baby girl delivered safely four hours into a trip to The Philippines from Dubai, but she got a pretty sweet birthday gift. Cebu Pacific airlines gave the baby born mid-flight 1 million airline miles. That basically means she'll be able to fly for free on Cebu Pacific for the rest of her life.

The baby, named Haven, was born after her mom went into labor five weeks early as the flight headed away from Dubai. Haven was born on board with the help of two nurses who were passengers and the flight crew, who are trained to assist in all kinds of events, like births and medical emergencies. In fact, lead crew member Mark Martin told The Guardian that two of the flight attendants were actually trained as nurses. So, in other words, Haven and her mom were in good hands!

He also expressed his joy at being part of Haven's safe delivery to The Guardian:

To baby Haven: You are God’s miracle at 36,000ft and we’re blessed to have been an instrument in your safe delivery. You will always be my most memorable passenger.

A passenger on the flight, Missy Berberabe Umandal, wrote about the only-in-the-movies event on her Facebook, saying:

We only heard one semi-loud screech, and a few seconds later there were tinier, cute screeches, and it was when we knew the baby was born.

Umandal also noted that there were a few other parents on the flight with young babies, who gave the new mom some clothes and other necessities to tide her over until the plane could land.

The flight was diverted to an airport in Hyderabad, India, so that mom and baby could head to the hospital. After her birth, Cebu Pacific airlines awarded Haven, and her family one million airline miles — since she was the first baby ever to be born on one of their planes.

What Happens If A Baby Is Born On A Plane?

One of the most puzzling things that happens when a baby is born in transit, either by plane or train, is that more often than not they are born in airspace of a country other than the one their parents were born in.

Flight crews are trained to handle all nature of medical emergencies, and the odds that a nurse or doctor will be on your flight are pretty good: so delivering a baby safely at 35,000 feet is actually the least complicated element to the story.

Airspace, where planes hang out when they're flying over different countries, sometimes extends less than 50 miles up into the sky. Sometimes higher. It's different for every country. If a baby happens to be born over open ocean, they aren't born to any nationality, since no one owns the ocean. Usually, as would be the case if they were born aboard a ship, they would assume the nationality of the ship — or the plane — that's carrying them.

So, a baby born mid-flight is usually permitted to either take on the citizenship of the country where the plane is registered, or the nationality of their parents. That all depends, again, on the country the baby is born over. Some will grant the baby citizenship and some won't, and convention usually dictates that they will offer citizenship only if the baby would otherwise be stateless. In case you're wondering, a baby born over the United States can claim U.S. citizenship.

In most cases, though, it's actually pretty simple: the law of jus sanguinis (Latin for 'right of blood') means the baby will just assume the nationality of their parents, just as they would if they had been born on land.

More Like This
Dad Removed From Flight After “Nervous” Toddler Wouldn't Sit In Own Seat For Takeoff
2 Million MamaRoo Swings & 220,000 RockaRoo Rockers Have Been Recalled
Health Officials Are Offering About 1 Million Children In London A Polio Booster
25 Great TV Shows About School To Watch As A Family