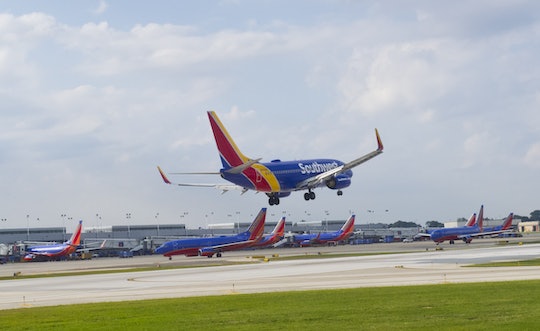 Baby Born On Southwest Flight Was Delivered By Onboard Medical Personnel

There are a lot of things that can make a flight unbearable and question your faith in humanity, but sometimes good things happen mid-air as well. On Sunday, a baby born on a Southwest flight caused the whole plane to make a pit stop in South Carolina on its way from Philadelphia to Orlando. Sure, travel delays are terrible and all, but seriously, a baby was born mid-air. How can that not melt your heart and cranky travel face? It's sort of amazing.

Update: In an email statement to Romper on Monday night, a Southwest Airlines spokesperson wrote, "... Medical personnel onboard assisted with the delivery. Local medical technicians met the flight upon arrival and transported the parents and baby to an area hospital. Although the family was stable when the medical technicians arrived, we do not have a status on their condition and do not release passenger information out of respect for our Customer’s privacy."

“Medical personnel onboard assisted with the delivery. Emergency medical technicians met the flight upon landing and transported the parents and baby to an area hospital," a Southwest spokeswoman Melissa Ford said in a statement. Romper's request for additional comment on the birth from Southwest Airlines wasn't immediately returned.

The other 132 passengers remained on the flight and waited for about an hour in Charleston so that the family could be taken to get medical care, according to reports. Eventually, the flight arrived in Orlando just an hour behind schedule. Which isn't that terrible if you think about it (and yes, I am thinking about it because I turn into my most impatient self during air travel). But when it comes to a child being born mid-flight, what's an hour?

Passengers on the flight were tweeting about the ordeal (because of course they were, what would you do?) and lauded the Southwest Airlines staff. "Flight crew did a great job," Twitter user Izzy Gould wrote.

According to officials, the woman in question was only 26 weeks pregnant when she went into labor mid-flight. Usually doctors recommend that women not travel after 32 weeks and some airlines won't allow women to travel at all after 36 weeks. So this Southwest passenger probably had no idea that she would go into labor somewhere between Philadelphia and Orlando. (That's also exactly why it's amazing that the flight crew was able to go into emergency mode and make sure that she had everything she needed and was safe way up in the air... because there's no way this sort of thing happens very often.)

It's one thing to have a crazy birth story. But on a plane? There are very few things that can make a flight bearable, other than a TV show you haven't binged yet on the in-flight entertainment system or free drinks. But a woman giving birth mid-flight and everyone around her rallying to keep her safe? That's something to get happy about.