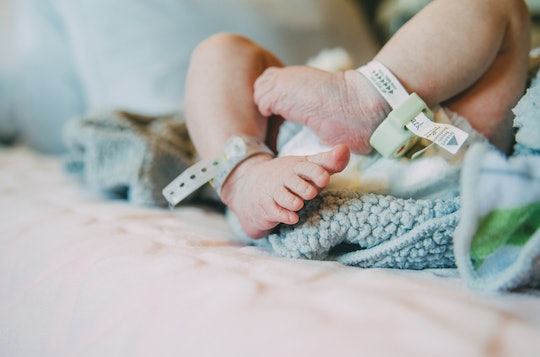 Everyone has heard of the term "medical miracle," and although it can sometimes be thrown around loosely, this is one story that's definitely deserving of the title. In Brazil, a baby born through a deceased donor's uterus marks an amazing medical first. Doctors continue to improve upon their understanding of fertility and what treatment methods exist for those seeking to improve it. This new birth opens new possibilities when it comes to improving fertility treatments across the world.

The baby was born at Hospital das Clínicas at the University of São Paulo School of Medicine in Brazil. The results of the study by the Brazilian team were published in the medical journal The Lancet.

What makes this story so unique is all babies have been born to women who received a uterus from living donors — until now.

The little girl was born by C-section on Dec. 15, 2017, according to the study's abstract, which means she's just about to celebrate her first birthday. According to Health, her mother had the uterine transplant surgery in September 2016, when she was 32.

Researchers have taken the past year to ensure the baby's health and, according to Scientific American, report that she's developing normally.

So, what does this mean for the future of fertility treatments?

Lead author of the study, Dani Ejzenberg, said, according to Eurek!Alert, "The use of deceased donors could greatly broaden access to this treatment and our results provide proof-of-concept for a new option for women with uterine infertility."

The uterus is shaped like an upside-down pear, as CNN noted, and is the reproductive organ that carries and protects a fetus until birth. There are a wide range of causes that can impact uterine fertility. According to Mayo Clinic, the uterus can be affected by benign polyps or tumors, endometriosis scarring or inflammation, and abnormalities that have been around since birth (such as an abnormally-shaped uterus).

"The first uterus transplants from live donors were a medical milestone .... However, the need for a live donor is a major limitation as donors are rare, typically being willing and eligible family members or close friends. The numbers of people willing and committed to donate organs upon their own deaths are far larger than those of live donors, offering a much wider potential donor population."

Uterine transplants overall are pretty recent procedures. Just 11 babies have been born from a transplanted uterus around the world, according to Health. It is amazing that researchers have managed to achieve this breakthrough in a surgery that is still relatively young.

The technique does still need to be "replicated by several teams around the globe," Mats Brännström at the University of Gothenburg (whose team performed the first successful uterus transplant — from a living donor — occurred) said, according to CNN.

"It is important that it also works with a deceased donor, with longer ischemic time and less time to investigate the organ," Brännström added, as reported by CNN, referring to the amount of time a donated organ is without blood flow.

Still, the case in Brazil shows a lot of promise, and opens up a lot of new doors.