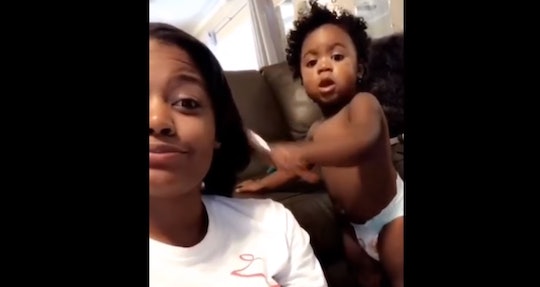 Baby Having Salon Talk With Her Mom Is Too Cute

The relationship between a woman and her hairdresser is truly like none other. Sitting in that chair, you feel free to dish out the latest gossip, vent about whatever is bugging you, and even unleash some of your deepest and darkest secrets. For one Texas mom, it looks like she won’t even have to leave her house for her next hair appointment because her little girl has got salon talk — really, the best part about getting your hair done — down to a T. And now that everyone else has also seen the viral video of the baby chatting with her mom while brushing her hair, they can feel like a part of the vent-session too.

Kerry Robinson initially posted the adorable video of her 1-year-old baby, Jayde, on Facebook last week; It's since amassed more than 200,000 reactions on the social media site and has been viewed more than 11 million times. And it really should be more, because this exchange will turn you into butter.

"Can you believe he tried to ask me to get up first to get your breakfast," Robinson said to Jayde in the video. "Girl, he crazy.”

"He crazy," she responded to her mom.

The 1-year-old continues the back-and-forth in what appears to be a conversation about her dad and free tickets to go to Sea World with adorable phrases like “and then what happened,” “he tripping, right,” “daddy’s tripping,” and “girl…”

Really, it's too cute to handle. (Check out the full video over on Robinson's Facebook page to watch the adorable conversation for yourself.)

She continued, "She's really verbal, so she retains everything we say and repeats it back to us. You have to be super careful about what you say around her because she remembers everything.”

With just a year of life experience and chatting practice under her belt, it's already clear that this 1-year-old has big personality and is a master in the art of girl talk. And that's impressive. As Refinery29 pointed out, most kids don't start putting words together into short phrases, like Jayde does in the video, until they are about 2 years old, according to the National Institutes of Health.

So, what will she conquer next? Well, Robinson did also share the incredible video on Instagram and tagged The Ellen DeGeneres Show. Hopefully this sassy youngster catches the attention of the daytime host and Degeneres' fan following of already several million people will get to see her make her TV debut as well. Until then, the rest of us can keep watching the video on repeat.