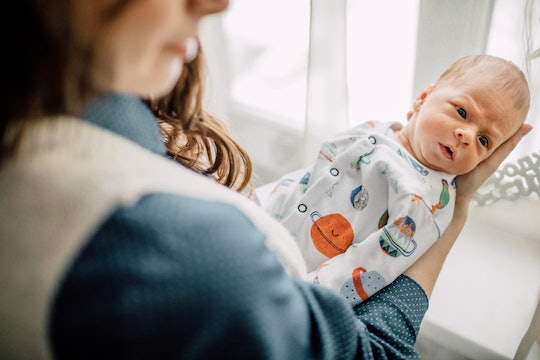 Is Feeding Your Baby On Demand Really As Demanding As It Sounds?

Breastfeeding was one of the true joys of my life. It was also one of the most tiring and trying things I have ever done and likely ever will do again. You see, I didn't just breastfeed, I breastfed my children on demand, whenever they wanted, for however long they wanted. It took a great deal of planning, and an entirely new and boob-accommodating wardrobe. But for me, since I was able, I felt it was worth it. Baby feeding on demand, also known as responsive feeding, is a tough road to travel, but there are myriad purported benefits for mother and child.

I contacted Leigh Anne O'Connor, internationally board certified lactation consultant, who confirms that feeding on-demand is "just what it sounds like. Nurse your baby when they are hungry as opposed to by a clock." You simply feed them when they cry or seem like they might be hungry. As Dr. Amy Brown, an associate professor in Child Public Health in the Department of Public Health, Policy and Social Sciences at Swansea University, U.K., wrote for KellyMom, "Responsive feeding takes advantage of a young baby’s natural ability to regulate their intake of calories — something that can disappear when a baby gets older. Feeding when they are hungry and being able to stop when they are full helps them to retain this ability."

Feeding on-demand is one of the biggest predictors of breastfeeding success according to research regarding the benefits of giving birth at a baby friendly hospital (published in Maternal and Child Nutrition). Researchers wrote that the sooner parents are educated and encouraged to breastfeed on demand the better the outcome for the child. Some of the benefits are lower rates of obesity later in life, lower rates of dental caries, fewer rates of type two diabetes, and a consistent association with "improved cognitive development."

O'Connor tells Romper that feeding your baby on demand has the somewhat unexpected benefit of helping your child become more flexible because they aren't tied to a rigid program of when they can eat. Instead, mom and baby naturally form a rhythm that underscores the comforting notion for the baby that when they are hungry, they will be fed, as opposed to having that hunger sated only at specific times around the clock.

Are the benefits of feeding your baby on demand limited to those babies who are breastfed? Not according to Dr. Amy Brown, who wrote for KellyMom that "responding to a baby’s feeding cues (both of hunger and satiation), whether they are breast or bottle fed is an important step to helping a baby develop not only a secure attachment relationship, but in establishing longer term positive eating behaviors."

Recent research reported in Time Magazine said that "Regardless of whether they were breast- or bottle-fed, babies whose cries were rewarded with milk or formula boasted an IQ that was up to five points higher than scheduled babies by the time they were 8 years old." That's a significant advantage, even if the prospect is fairly daunting.

Brown noted that breastfed babies will likely eat more than you probably think — between eight and 12 times per day in the beginning. KidsHealth reported that "On average, a newborn drinks about 1.5-3 ounces (45-90 milliliters) every 2-3 hours."

Ashley Treadwell, IBCLC from the San Diego Breastfeeding Center wrote on the center's blog that you should watch your baby and not the clock. There are ways that your baby will show you that they're hungry, she explained. They could lick their lips or stick out their tongue. Rooting at your breasts and hand sucking are also common. When they do start to feed, feed them from both breasts if they're interested, but don't time it. Breastfeeding is about more than just nutrition. It's also about connection. The only time they suggest timing your feedings is for especially sleepy babies or premature little ones. They wrote that parents should be sure to feed them every three hours during the day and four hours at night to make sure they get back to their birth weight within the first two weeks.

And the benefit isn't just for babies. Researchers at Maternal and Child Nutrition also found that the mothers of babies feeding on demand are less likely to experience breast and ovarian cancers and postpartum hemorrhage, in part because they're more likely to continue breastfeeding, and that means that they will more likely to be benefiting from these long-term effects of breastfeeding. The scope of benefits are pretty huge, and not easily ignored.

It might feel like they're constantly eating — and it's partially true, but sometimes it's just about comfort, and that's OK.