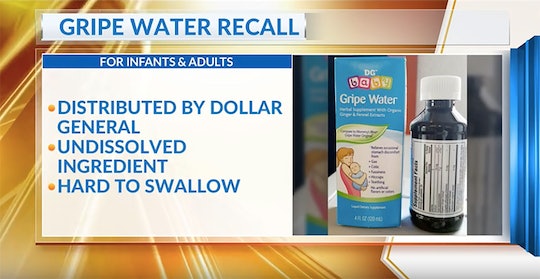 The Food and Drug Administration (FDA) announced on its website Friday, Feb. 15 that Kingston Pharma, LLC is voluntarily recalling its Baby Gripe Water sold at Dollar General stores due to a possible choking hazard. Although use of the product isn't considered "hazardous," it can pose swallowing difficulties for "sensitive individuals," the warning states.

If you're not sure what Baby Gripe water is, it's a "liquid herbal remedy marketed for relieving colic symptoms in babies," according to Healthline. Not every formula is the same, but Baby Gripe water is typically compromised of "sodium bicarbonate and herbs (such as fennel, ginger, chamomile, cardamom, licorice, cinnamon, clove, dill, lemon balm or peppermint," for example, according to the website What To Expect.

As for how the flavonoid plays into the recall? Kingston Pharma, LLC voluntarily recalled Dollar General's Baby Gripe water due to the presence of an "undissolved ingredient," citrus flavonoid.

Using the product isn't considered hazardous, but it could make swallowing difficult for "sensitive individuals." At the time of the FDA's announcement, "Kingston Pharma LLC has received one report of a one-week old infant having difficulty when swallowing the product and three complaints attributed to the undissolved citrus flavonoid," according to KKTV 11 News.

Dollar General and Kingston Pharma, LLC did not immediately respond to Romper’s requests for comment.

If you're concerned about this recall, be sure to check your Baby Gripe water bottles. The product is "packaged in 4-ounce amber bottles, white plastic caps with safety seals and provided with an oral syringe, with UPC Code 8 5495400246 3," according to the FDA.

Additionally, if your child has experienced any "adverse reactions" due to the product, contact "Christina Condon or C. Jeanne Taborsky by phone toll free at 844-724-7347 or by e-mail at Christina.Condon@SciRegs.com," according to WTKR. It's also important that parents contact "their physician or healthcare provider" if they have any concerns.

In general, Baby Gripe water is not advised for infants under 1 month as their "digestive tract is sensitive and still developing at this age," according to Healthline.

Additionally, make sure to read the ingredients thoroughly before administering Baby Gripe water to your child. It's important to look for these following signs in particular, according to Healthline:

If you don't want to use a Baby Gripe water formula, there are natural ways to ease your child's symptoms. You can try placing a warm towel on their stomach, taking a ride in the car, putting on some white noise, or rocking your baby in a rocking chair, according to Parenting.

Although this recall isn't deemed "hazardous," it's always helpful to be aware of your options regarding products. Read all of product ingredients throughly, and reach out to your health care professional if you ever have any concerns.