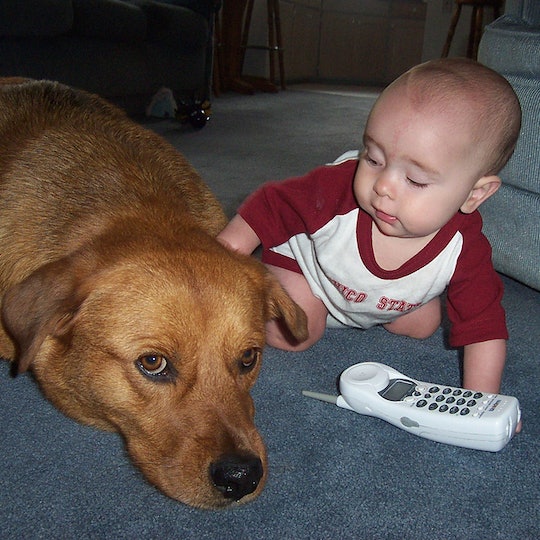 Baby Learns How To Howl From Family Dogs, & It's The Best Thing That's Ever Happened

In addition to being boatloads of work, kids and pets can provide us with hours of snuggles, love, and amusement, each on their own. So it's no wonder that putting them together can often result in mind-blowing awesomeness. A recent addition to Team Adorable Creatures Of The Internet: two vocal pups and an eager baby competing with them in the most adorable howling contest I've ever seen. (OK, it's the only howling contest I've ever seen, but that doesn't make it any less cute. I'm open to seeing additional howling contests so I can accurately judge which is the cutest. Ya know, for science.)

Part of me is now interested in trying to recreate something similar in my own household, but I'm not sure that my dog and my kid would be inclined. Neither of them has shown a propensity for howling and, as we all know, it can be next to impossible to get either toddlers or dogs to cooperate when they're just not feeling it. However, they're both quite good at finding things that my partner and I don't want them to have, trying to eat things that they shouldn't, and looking really cute when I'm starting to feel frustrated, so those might be future ways that they'll square off. I should probably get my camera ready.

In the meantime, we can thank Larry Woods for providing us with this gem:

Thankfully, this clip isn't the only way we can appreciate talented dogs online (thanks, internet!). Check out these sweet pups who could teach other babies a thing or two:

My toddler is pretty dang good at peek-a-boo (and I'm not being biased, I swear), but this dog wins. This dog wins everything. There is nothing I wouldn't vote for this pup for. Pup 4 Prez.

Maybe this pup could come visit our house since I'm willing to try basically anything that might help my little stay seated in the stroller. This dog-nanny clearly has skills I don't.

Seriously, how do they get these dogs to do that? I'm less impressed by the dogs pushing than I am by the ones sitting still in the seats.

Not that photobombing is a good habit to encourage, but I don't think I'd mind a few similar shoots with my own tiny loves.

Before stumbling upon this talented pup, it never occurred to me that creatures could possibly swaddle themselves. Though my son has long grown out of swaddling, should I ever have another kiddo, I will study this master.

Like most toddlers, ours isn't always a fan of nap time. This beautiful dog clearly has no problem with it and could probably teach a thing or two. God, this puppy is #lifegoals all over the place.

More Like This
Here’s What You Need To Know About That Viral 1960s Baby Formula “Recipe”
The 40 Best Toys For 6-Month-Old Babies
The Best Apps For Selling Used Baby Gear
Abbot's Formula-Producing Plant Can Reopen In As Early As 2 Weeks — Now What?