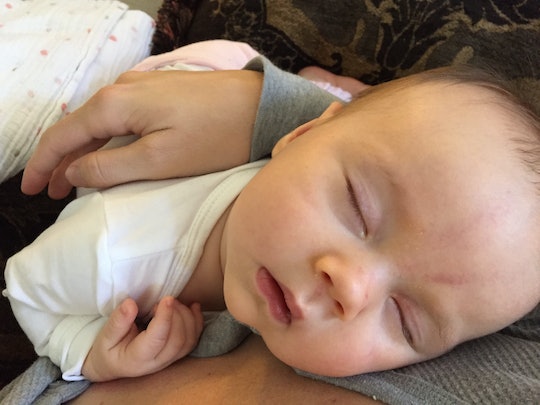 Here's Why Your Boobs Are Your Baby's Favorite Sleeping Spot, According To Science

You would be hard pressed to find a mom who doesn't have at least one photo of their little one sound asleep upon her bosom. Gosh, those moments were some of my favorites when my daughter was a baby (sleeping baby + cuddles = parenting win). But why is it that your chest seems to be their top spot for curling up for a solid snooze? After all, even the most temperamental of sleepers seem to find comfort using their mother's breasts as a pillow. Curious why? Here's why your baby likes to sleep on your boobs, according to science.

"It’s the same reason why moms used to put a pocket watch in the bassinet," Nicole Porter, PhD, a sleep and fatigue specialist, tells Romper in an email interview. "The ticking watch helped a baby sleep." Porter, who is also a fellow of The Dalai Lama's Mind and Life Institute and an alternative medicine researcher, says sleeping on a mom's breast has a similar effect because it allows a baby to hear their mom's heartbeat. "It reproduces the in utero environment where mom’s pulse was the primary and constant sound the baby heard," she says. "It's familiar and comforting. — and it really works."

Porter says the concept, called familiarity learning, also works with other sounds. "Babies preferentially attend to any sounds they were exposed to before birth," she says. "If they heard Mozart and Shakespeare — it's Mozart and Shakespeare. Or Eminem and Super Mario. It's interesting if you think about it."

But is it safe to let your little one fall asleep on your chest? According to the American Academy of Pediatrics, about 3,500 babies die each year in the United States during sleep because of unsafe sleep environments. "Some of these deaths are caused by entrapment, suffocation, or strangulation," the website noted. "Some infants die of sudden infant death syndrome (SIDS). However, there are ways for parents to keep their sleeping baby safe."

Among them are placing your baby to sleep on their back for every sleep and, if you are feeling particularly tired, feeding your baby on a bed instead of a sofa or cushioned chair. "Make sure to remove pillows, blankets, or other soft bedding, in case you fall asleep while feeding," the AAP noted. "If you do fall asleep, move your baby back into her own bed as soon as you awake."

After all, The Huffington Post noted that exhaustion is a new mother's top complaint, quoting a Baby Center survey that showed more than 50 percent of them sleep fewer than six hours per night. "Parents are told that extreme fatigue is just an inevitable nuisance, like dirty diapers," the article's author wrote. "But, chronic sleep deprivation is a very serious problem. It causes a type of cognitive fuzz that leads to depression, car accidents and the same poor decision-making that occurs with drinking."

On the other hand, letting your newborn sleep on your chest can be a great opportunity for important skin-to-skin contact, and the carbon dioxide that mothers release while sleeping near their babies can help stimulate their breathing, according to Parenting.

The safest answer, perhaps, involves going over the rules of safe co-sleeping. Today's Parent suggested that if you're going to nap or sleep with your infant, then opt for bed-sharing. Necessary steps to ensure safety include making sure your mattress is firm and flat, keeping other children and pets out of the bed, and avoiding co-sleeping if you have taken medicines or other substances that will make you less aware because you need to be able to react quickly.

And you can always do the stand and shuffle dance — you know, the one that involves you doing a little jig to lull your baby to sleep. That keeps you alert while safely scoring you those coveted cuddles.

More Like This
Here's When Your Baby Might Start Sleeping Through The Night For Real
Here’s What You Need To Know About That Viral 1960s Baby Formula “Recipe”
The Best Apps For Selling Used Baby Gear
Abbot's Formula-Producing Plant Can Reopen In As Early As 2 Weeks — Now What?