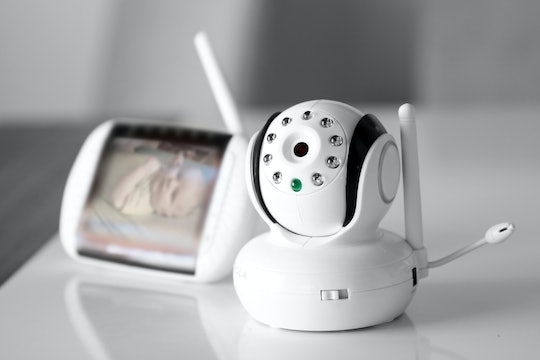 There are plenty of spooky baby monitor stories out there (remember the parents who caught a "ghost" on their daughter's cam?) but this viral baby monitor photo might take the cake. Shared to Twitter Nov. 14 by parent Elise Bannister, the picture in question shows infant Finn sporting "demonic" eyes, á la The Exorcist. The pic has received over 409,000 likes as of Monday, and it has inspired other parents to share truly chilling snaps from their own baby monitors.

When Bannister purchased a new VTech baby monitor, the last thing she expected was to go viral as a result. But that's exactly what happened when she shared a hilarious yet terrifying shot of Finn giving his best possessed by a demon impression, complete with glowing eyes. "We got a new video baby monitor and I think that was a mistake," she captioned the funny shot on Twitter, which has since been retweeted over 80,000 times.

As if this picture wasn't good enough, Bannister followed up the shot with an epic joke, writing, "On a related note, does anyone have experience with a good noise generator app? Every one that I've tried so far is just layers of whispered chanting in Latin instead of white noise. It still puts Finn to sleep but I don't like it."

After Bannister shared the image, countless parents took to the thread to share their own demonic baby monitor shots.

"Had the exact same experience," one parent captioned a shot of their glowing-eyed child.

"I had a similar treat one night," someone said about their toddler wrapping themselves up in a bed sheet to look like a ghost.

Others came with jokes, with one person writing, "Is your baby baptized? If so, might want to try it again. First time clearly didn't take," while someone else said, "Can you return it? The baby, I mean return the baby."

In response to all of the messages, Bannister shared another hysterical follow-up, this time sharing a photoshopped pic of her "demon" baby. "This has blown up a bit, so I thought I'd post a normal photo of my baby so y'all can see how cute he is," she captioned the shot of her son sporting a ghoulish purple face.

Bannister also expressed surprise the pic has gone viral, telling TODAY: "When I first started it up and saw that Finn was just silently staring at the camera like something from a low-budget horror movie I absolutely lost it laughing. It was hilariously creepy. I initially took the picture to share with a group chat of friends. I had no idea it would go this far!"