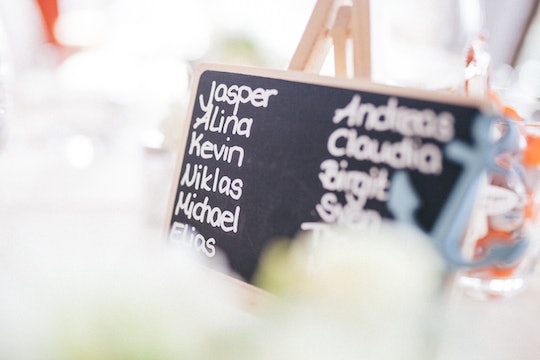 This App Uses Psychology To Help You Pick A Baby Name

Picking a name for your baby is not easy. Nor is listening to everyone's opinions about the names you're considering, which is exactly why this new baby name app that uses psychology to pick the perfect name might just be your new BFF. Chooze uses questions to dig into your subconscious and see what you really want to name your newborn. This way, you know in advance whether or not you're going to regret your final choice.

To use it, you have to have a shortlist of some of your favorite names ready. You plug a few in that you're thinking about and a few names that you don't like. The app then asks you a series of questions that try to gauge the associations you have for each name.

Co-founder Ittay Hayut said in a statement announcing the release, "Baby names are a challenging journey for every expectant parent and there's never been any technology that helps them pick." Hayut added that the app is meant to ensure that parents are "confident" about the choice they're making and feel good every time they say their kid's name. That's a pretty big mission, but then again, deciding on a baby name is a pretty big deal, so whatever works.

Chooze's system is based in science. In addition to Hayut and his co-founder, Sarit Shaanani, there are two cognitive psychologists — Dr. Eran Chajut and Dr. Ran Hassin — who've backed the app and the thinking behind the prompts and what they can reveal.

A study done by Bounty.com surveyed 3,000 parents and found that 15 percent of them felt that their friends and family were mocking the name they chose. Another 19 percent wish they had chosen something more unique and 8 percent that they had chosen a name that was easier to pronounce. Others reported that they wished they hadn't chosen something so "quirky" since the novelty can wear off pretty quickly.

When you add up all of those numbers, that's a whole lot of regret. (Let's hope they don't tell the kids their name is cringeworthy.) Other baby name apps on the market tend to offer parents a way to brainstorm better. Some consider the child's astrology, offering up more unique choices, or rank the most popular and trendy names of the moment. Chooze aims to make sure you actually like the name, which is a pretty cool approach, all things considered.

Even better? You can try it out for 99 cents right now, or for $1.99 after the promotional launch discount ends.