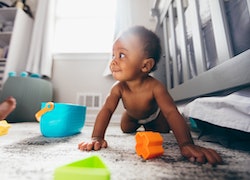 If You Like The Name Liam, Here Are 20 More Baby Names From The British Isles

Short for the English name "William," Irish "Liam" is its charismatic, friendly cousin that just so happened to be the most popular boys' name of 2017 and 2018, according to Nameberry. But the name has actually been a popular British standby for a long time and counts several celebrities as namesakes, including actor Liam Neeson, former Oasis bandmember Liam Gallagher and One Direction member Liam Payne. While I think it's just distinctive enough to not be played out by being so in demand, there is a list of baby names if you like Liam from around the British Isles that hit the same round notes.

While most parents look for names that will set their babies apart, many don't seem to stray too far from popular name lists for fear of creating problems for their children. That's why taking a deeper look at traditional names in Ireland, Scotland, England and Wales is a good idea, because they are likely to come up with something that is unique and familiar. Because English is derived from several languages like German, Latin, Gaelic, French, Welsh and more, we borrow from a variety of traditions that provide a deep well of names that have been used throughout the centuries. So if Liam is a favorite, but you want something less popular, here are 20 to think about. (Bonus: These aren't just for boys, either.)

More Like This
20 Bridgerton-Inspired Baby Names
43 Awesome Toys For 18-Month-Olds
30 Adorable Baby Halloween Costumes, From Animals To Avocados
The Difference Between The PICU & The NICU

This article was originally published on Sep. 5, 2018