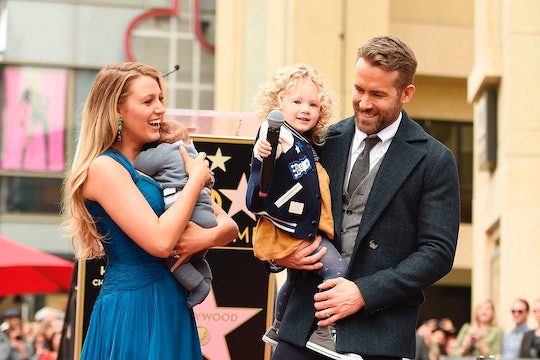 The white blonde hair, those delicious baby curls, the huge grin. Yup, it's clear Ryan Reynolds and Blake Lively make beautiful babies. That being said, however, I think it's highly possible the couple's offspring inherited their adorable looks from Lively (sorry, Reynolds — knowing how much you like to joke, I don't think you'll oppose this sentiment). Want some proof? Look no further than these baby photos of Blake Lively.

Lively, who was born into a large family of California actors, has shared some baby pics of herself throughout the years. And although the actor is typically more private on her social media than Reynolds is (his entire Instagram feed is seemingly filled with baby pics and snapshots of his family), a few enticing clues about her background have slipped out.

One rare shot shows her with what I assume are several of her older siblings (Lively's father, who is also an actor, has children from a previous relationship.

"Chillin' with my homies... #throwbackthursday #tbt," Lively wrote in 2015 next to a seriously adorable pic of herself in a purple Nike onesie (or oversized shirt, '90s style?) I don't know about you guys, but I definitely see hints of James, 4, in this sweet pic.

This cute shot was a big hit with her fans, but it took a couple more years for it to be clear that little Blake had curls, which she eventually passed on her daughters, James, 4, and Inez, 2.

Since Lively and Reynolds seem to want to be low-key as a family, they don't give their kids a lot of red-carpet opportunities, which I respect. Still, certain occasions call for a slip of the usual rules; Reynolds receiving a star on the Hollywood Walk of Fame in 2016, as E! reported, was the occasion for which the two brought the girls along. That's how we know that little James and a young Blake look incredibly alike (Inez was too small to make any conclusions re her hair, sorry.)

Another flashback photo of Blake, from a fan's Twitter account, shows her adorable pout, which her daughters have seemingly inherited.

Of course, it's hard to say who baby number 3 will favor, as their next bundle of joy hasn't arrived yet. And if the baby-to-be is a boy, it will be interesting to see how Blake's features will manifest in them.

As for Reynolds' influence on his kids, I think it's safe to say James has inherited his knack for humor. Lively touched on this sentiment in a September 2018 conversation about James' thoughts on childbirth.

"I had to explain to my daughter what an anniversary is," she told Good Morning America. "She's like, 'What is it, does it mean you’re having another baby today?' and I was like, 'Dear God, no. It doesn't, it means it's our wedding's birthday.'" Ha!

It's awesome to watch Lively and Reynolds' little girls grow up, and it's even sweeter to see how their parents' traits have manifested in them. Way to make adorable children, you two!

More Like This
30 Adorable Baby Halloween Costumes, From Animals To Avocados
20 Bridgerton-Inspired Baby Names
Khloé Kardashian Reveals Tristan Thompson Proposed To Her Last Year & Why She Said No
People Are Convinced Kylie Jenner Gave Her Baby Boy A Weather-Themed Name