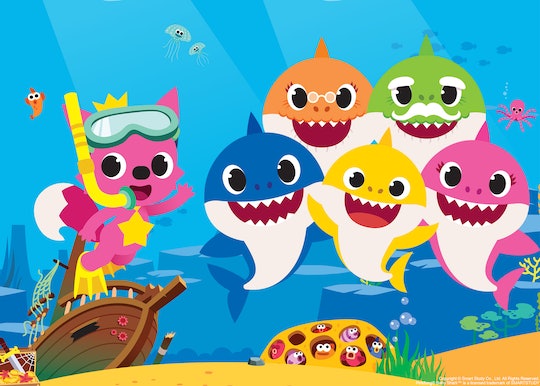 If you have children under the age of 10, or spend a significant time around kids that age, then you're probably familiar with the YouTube hit, "Baby Shark." The viral sensation, created by the South Korean firm Pinkfong, has been listened to billions of times. And, TBH, it's one of those tunes that gets stuck in your head and, well, is next to impossible to get out, and it's not going anywhere fast. News broke today that "Baby Shark" is officially going on tour, hitting more than 100 cities across the United States, so you should probably get used to having it on mental loop 24/7.

More Like This
Vaccinated People Can Ditch Masks. Where Does That Leave Kids?
The 7 Best Water Tables For Your Little Ones
The Best Splash Pads For This Summer
30 Cheap & Easy Summer Activities For Kids

The very popular earworm is going from screen to stage, according to Billboard. A live show surrounding the song is being put together, and will begin popping up in American cities starting in October 2019. According to a press release, Baby Shark Live is being produced by Round Room Live, which is the same production company behind the live show for Disney Jr.'s PJ Masks series and the iceskating show, Rock the Rink.

The company's president, Stephen Shaw, told Billboard "Baby Shark" has proven its incredible power since its online debut, adding that he's excited to start working on the live show. "There's obviously something incredible there with 'Baby Shark' and the toughest part for us is taking the three minute viral video and being able to produce a live show for the stage," he told news outlet. "Thankfully Pinkfong has a large catalog of songs that we have access to, with more than 400 titles."

The show will star Baby Shark — duh — and his pal Pinkfong. Together they'll take attendees on a musical journey under the sea, according to the press release. The show will include "Baby Shark," as well as other viral hits from Pinkfong like "Five Little Monkeys," "Wheels on the Bus," "Jungle Boogie," "Monkey Banana Dance," and more.

Tickets to Baby Shark Live aren't available just yet, but those hoping to take their kids to see the show can, however, visit the show's website and sign up for pre-sale access to tickets. And the tour schedule will be announced on July 9.

News of the live show comes not long after Deadline announced that Nickelodeon was working on a show based on "Baby Shark." Few details were known about the show at the time, but EVP of Nickelodeon Animation Ramsey Naito told the news outlet Baby Shark is "a terrific character," adding that he was thrilled to welcome him to the network.

"At the heart of any popular piece of content is a terrific character, and we have a great opportunity to further explore the world of Baby Shark and follow this family through some great animated adventures on Nickelodeon," he said at the time.

Parents may not be huge fans of "Baby Shark," especially after listening to it upwards of a million times by now, but kids continue to enjoy it. The show may introduce your kids to a few new songs... or just reinforce their love of this one. Who knows. Either way, it's sure to be a blast, and it's all about creating lasting memories with your family.