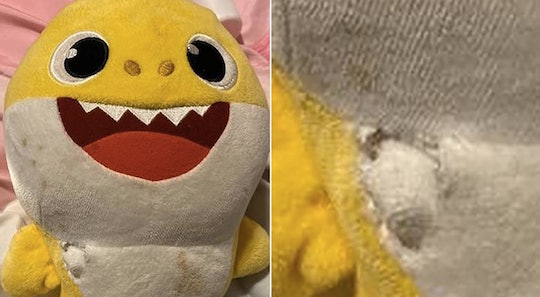 During a gunfight in Madison, Wisconsin on Nov. 24, a baby shark toy saved a 3-year-old girl from a stray bullet, city police said. The bullet, which pierced through the toddler's bedroom wall, was just a few inches from her head.

From live concerts to merchandise, the character of Baby Shark — made popular by Pinkfong's "Baby Shark" song in 2016 — is just about everywhere you look these days. But I had never heard of a life or death story involving Baby Shark until recently, when Wisconsin's City of Madison Police Department reported Tuesday an incident involving the plushie and a gunfight.

Police believe the ordeal began when two opposite sides started shooting at one another in the 900 block of Vernon Ave, with multiple bullets damaging vehicles and buildings, according to the Wisconsin State Journal.

Luckily no one was hurt in the melee, but there was a close call involving a 3-year-old girl, who was sleeping when one of the stray bullets entered through her bedroom wall and into her baby shark plushie, which was just "5 to 10 inches" from her head. “If the bullet would’ve came a couple more inches, it could’ve targeted her,” the toddler's mother, Tanice, told NBC 15.

Tanice, who didn't provide her last name, said she felt "lucky" her daughter avoided harm. She also noted how her child was playing with the toy in her bed just 30 minutes before the shootout occurred.

Police ultimately located 45 shell casings related to the gunfight, a shockingly high number that garnered a statement from Madison's mayor, Satya Rhodes-Conway. "It is is the police department’s highest priority and we will continue to work with the police, community leaders and other criminal justice stakeholders to address gun violence in our community," Conway said in a message shared to the City of Madison's website.

She continued, "Gun violence is not going to be tolerated in Madison. The people involved in this incident showed reckless disregard to human life, and we are fortunate no one was injured or killed. If anyone knows anything about this, it’s time to speak up.”

No child should ever have to worry about gun violence before going to bed, and despite the miraculous outcome here, this isn't a feel-good story.