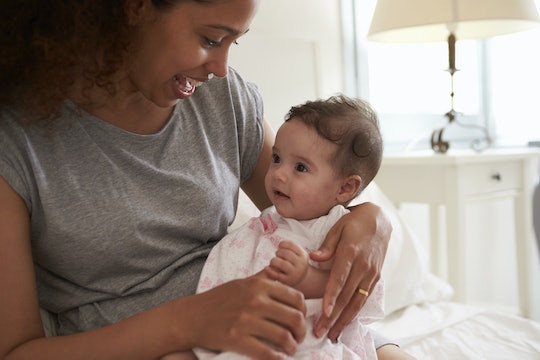 Baby Talk Has This Important Developmental Benefit, According To A New Study

Prior to having a child of my own, hearing grown people say words like "potty," for bathroom and "moo moo" for cow kind of wigged me out. I vowed never to be one of those people. Fast forward a couple of years and I am "choo-choo"ing with the best of them. It seems that baby talk is just unavoidable. But that's OK! As it turns out, baby talk helps infants learn faster than simply speaking to them in normal voices and using real words, according to a recent study. So "goo-goo gaga" away, parents; your kids will thank you for it.

The study was conducted by researchers at the University of Edinburgh who examined the speech progression of 47 infants learning English and the amount of baby talk that their parents used with them. Science Daily reported that those children who regularly heard words like "tummy" and "night-night" picked up new words more quickly between the ages of 9 and 21 months, as compared to peers who were not exposed to these types of words. Researchers came to this conclusion by measuring vocabulary size in children at 9, 15, and 21 months.

For the sake of this study, the helpful variety of "baby talk" refers to diminutives — or words ending in "y," like "mommy," "daddy," and "doggy"— as well as words with repeating sounds, like "choo-choo" and "meow-meow." The use of these two types of words could serve to help infants more easily identify words in regular speech, according to HuffPost.

While this study looked at English speaking infants in particular, lead researcher Mitsuhiko Ota, of the University of Edinburgh's School of Philosophy, Psychology and Language Sciences said, according to the BBC, that the team's findings do not only apply to English language acquisition:

Our findings suggest that diminutives and reduplication, which are frequently found in baby talk words — across many different languages — can facilitate the early stage of vocabulary development.

Along with the sound of the words, the placement of "baby talk" words helps infants pick them up. The words intended for the baby to pick up are often placed at the end of the sentence, according to CNN, such as "Is that a doggy?" and "I am your mommy." Babies learn words placed at the end of sentences more easily. Additionally, CNN reported that words repeated and spoken on their own are often learned more easily, such as "bye bye" and "mommy." These are often the first words that babies learn.

Baby talk, also referred to as "motherese" by linguists, also comes with its own set of pauses and pitch changes that help babies tune in to language. A 2017 study conducted by researchers at Princeton University, published in the journal Current Biology, found that infants prefer to listen to this sort of exaggerated language than plain speech and learn words spoken this way more easily. When adults highlight the structure of words, like dragging vowel sounds, babies are able to translate these sounds into "units of language," according to The Washington Post. Without meaning to, parents often make their speech more accessible to infants. The same tendency to change pitch and tiber in speech was found across a variety of languages as well.

So, what is the takeaway here? Basically, you should have no shame in your baby talk game. Not only will your child know that they should tune into what you are saying when you speak to them in motherese, they will also pick up new words more quickly. There really is no down side to baby talk, aside from possibly feeling a bit silly.