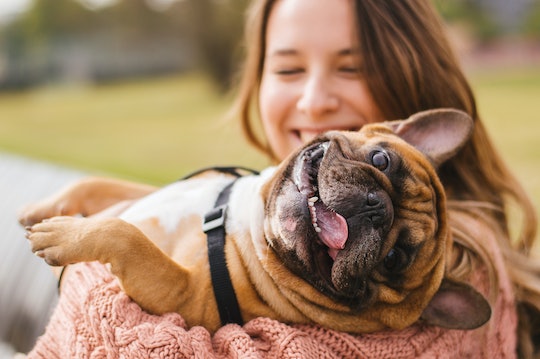 Turns Out, Baby Talk Doesn’t Just Benefit Your Baby, It Benefits Your Dog Too!

These days, I'm a perpetually-exhausted mom of 5-year-old twins, but I like to think my first taste of motherhood actually occurred eight years ago when I first brought home my then-tiny puppy-child, Penny. Not only did I adore her beyond words from the moment I first laid eyes on her, but the pride I felt when she learned to pee outside, climb down stairs without falling, or sit on command was basically the same as when my kids took their first steps. And while not everyone is on board with the idea of dog-parenthood, a new study has found that "dog speak" serves the same purpose as baby talk in that it helps to facilitate bonding, and that dogs actually feel more attached to us when we speak to them using the same voice we would for baby talk, according to Science Daily. In other words, dog speak is yet another example of how dogs are basically just fur-covered babies, and while anyone whose first child happened to have had four legs and a tail could have easily told you as much, it's nice to see that science is finally catching on to this obvious universal truth.

To be fair, I will admit that, at this stage in my life, Penny's dog-baby status has worn off a little bit, and she's definitely no longer the apple of my eye the way she was to my child-free self. Even so, baby-talk-esque dog speak still spills out of my mouth on the regular ("Who's a good dog? Are you a good dog? Does Penny want a belly rubbbbb?"), so it's pretty intriguing to hear that the way we talk to animals as though they are children actually serves an important purpose.

The dog speak study was performed by researchers at the University of York in the U.K., who wanted to figure out why it is that we use dog speak with our pets — is it just because they're tiny and cute like human babies, or is there more to it than that? It wasn't the first time researchers have looked into dog-human communication: in 2017, researchers at City University of New York found that using a "high-pitch voice with exaggerated emotion" with puppies the way we do with infants made them more engaged, and studies have also established that when parents use baby talk with their infants, it makes it easier for babies to learn their mothers' voices, and to know when they are speaking specifically to them.

The result? Dogs really do seem to respond to dog speak, and specifically, they were "more likely to want to interact and spend time [with humans who] used dog-directed speech with dog-related content," than those who used their regular voices, or than speakers who didn't say anything specifically dog-related. The takeaway? According to researcher Alex Benjamin, the findings suggest "adult dogs need to hear dog-relevant words spoken in a high-pitched emotional voice in order to find it relevant."

Like baby talk, dog speak isn't usually something that humans seem to use on purpose — for many of us, it just seems to be what comes out in the presence of adorable babies or animals — so it's eye-opening to think that it actually serves a purpose. And although dogs, like babies, might not necessarily understand what we're saying, they definitely seem to at least grasp the fact that we are trying to communicate with them. Even more importantly? Dog speak is a form of communicating that actually helps the dog-human bond.

In other words, treating our dogs like our babies might not be a bad thing after all. And anyone who wants to argue that point can keep their opinions on dog-parenting to themselves, thank you very much.