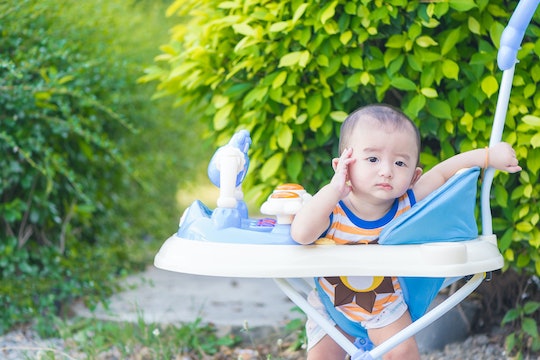 The AAP Wants To Ban Baby Walkers For This One Reason

If you have a little one, then you're likely well aware that babies often have the urge to move and explore before they're physically ready to. Plenty of baby gear products exist to help bridge that gap though — Bumbo chairs and Jolly Jumpers let them experience sitting upright and bouncing, and then there are baby walkers, which give babies the chance to scoot around the house with a little help from wheels on the bottom of the frame. But parents may want to reconsider using them: a new study found that baby walkers cause more than 9,000 injuries each year, and it's why experts are calling for the devices to be completely banned.

In a study published Monday by the American Academy of Pediatrics, researchers found that while baby walkers with wheels might be a popular item among parents of young children, they come with a high risk of injury. Between 1990 and 2014, for example, an estimated 230,676 children under 15 months old were treated for injuries related to baby walkers, according to CNN, and while improvements to safety standards have at least made the number of injuries decrease over the years, still, more than 9,000 children in the United States are injured by them each year. And the injuries that do occur are pretty much exactly what you'd expect them to be: 74.1 percent of injuries were due to babies falling down stairs while in their walkers, falling out of the walker itself, or grabbing an object from the walker that they wouldn't normally be able to reach. And more than 90 percent of those accidents resulted in head and neck injuries, which can be extremely serious.

To be honest, it's really easy to see why baby walkers on wheels are so popular. Watching a baby finally be able to get themselves on the move is so fun, and the infants themselves certainly seem to enjoy the adventure. It is frustrating, after all, when a baby wants to move but doesn't yet have the strength or coordination to walk, and since baby walkers also usually come equipped with toys, they generally seem like a great way to keep an active kid occupied.

But the reality is that a child in a wheeled contraption that they can't really properly control is also at a much higher risk of injury. In a 2015 video, Mayo Clinic pediatric surgeon Dr. Christopher Moir said that 35 percent of seriously injured children who are admitted to the hospital have been hurt because of falls, and that, most often, those falls happen from windows, playground equipment, or, you guessed it, baby walkers.

In fact, the risk involved in wheeled baby walkers is precisely why they have already been banned in other countries. After 15 years of retailers in Canada agreeing to voluntarily refrain from selling walkers due to safety concerns, Health Canada introduced an official ban on baby walkers in April 2004, according to The Huffington Post. Companies are no longer allowed to sell or advertise baby walkers in Canada, and parents are also not allowed to import them from elsewhere, nor can they sell any second-hand baby walkers they may own (doing so can result in major fines, or even jail time).

That might seem extreme to some, but given the high rate of injury, it makes a lot of sense. What's more though, is that baby walkers, which were once purported to assist babies' motor development, have since been found to do the exact opposite. In a 2010 article in The New York Times, pediatrician Dr. Alan Greene explained that studies have actually linked the use of wheeled baby walkers to gross motor delays in children, and, surprisingly, even mental delays, too. Greene explained,

In other words? Well, there really isn't any benefit to using wheeled walkers at all. Not only do they pose a significant falling risk, they might actually be keeping children from developing normally. Greene's suggestion? Parents may want to at least opt for "stationary activity centers for babies," which will certainly keep them interested and occupied without the risk. But the expert consensus is also pretty clear: given all the data available, the AAP's official recommendation is a total "ban on the manufacture and sale of mobile infant walkers."

As much as that may sound like a total bummer for parents who enjoy letting their babies roll around and have fun, it does seem like there is more than enough evidence that the proposed ban is totally reasonable. So if you have a wheeled baby walker? You'll probably want to ditch it ASAP. And when they inevitably end up on used baby gear sites by parents whose kids have grown too big, it'll probably be a good idea to spread the word so that other parents can be spared the risk, too.