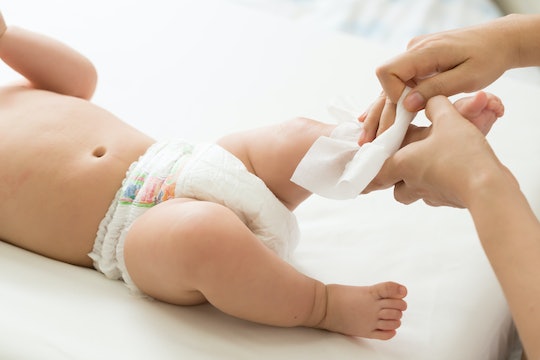 Food allergies can definitely be a big deal for kids. They can range from being a slight annoyance that both parents and children have to deal with, to being life-threatening, depending on the severity of the allergy. So it might be a bit worrisome that food allergies are linked to baby wipes in a new study, but parents don't need to freak out too much just yet, because there's more to it than just "baby wipes are bad."

Researchers at Northwestern University recently found that there seems to be a link between skin damage and intolerance to some foods, according to The Telegraph. The outlet explained that the top layer of skin is made up of lipids that can be "disrupted" by the soap or soapy chemicals found in baby wipes, and if a baby already has a predisposition to "altered skin absorbency," coming into contact with these chemicals can raise their risk of exposure to food allergens. Sound a little confusing? It is, but the basic gist of the findings seems to be that genetics plus wipes plus food allergy exposure equals an increased risk of food intolerance.

Basically, the study doesn't say that baby wipes are all totally evil and lead to a definite higher risk of food allergies. But it does suggest that some babies may be more susceptible to developing a food allergy, and that when parents use wipes and don't properly wash off their baby's skin after, they're not helping matters.

Baby wipes may breach the natural protective coat of a baby's skin and make it more sensitive to unusual chemicals, The Independent reported. And when babies face repeated skin contact with allergens in an spot where soaps from wipes have already stripped the natural oils from their skin, they might become vulnerable to absorbing chemicals that cause allergies. Repeated exposure can occur from something as innocent as a baby being kissed by a sibling who has peanut butter on their face, The Daily Mail reported.

It's important to note that for this particular study, researchers tested their theory using neonatal mice with genetic mutations that also occur in humans, but they didn't test on humans. First, lead study author Joan Cook-Mills, a professor of allergy-immunology at Northwestern University Feinberg School of Medicine, used a neonatal mouse model that had skin barrier mutations and tried to expose its skin to food allergens like peanuts, and found that the peanuts alone didn't seem to make an impact, Northwestern Now reported.

But after the neonatal mice with skin mutations received three to four skin exposures of food and dust allergens over a two-week period for 40 minutes, they were given egg or peanut orally, and the mice developed "allergic reactions at the site of skin exposure, allergic reactions in the intestine, and the severe allergic food reaction of anaphylaxis that is measured by decreased body temperature," Northwestern Now noted.

In preclinical studies, the mice were heterozygous (where there is a mutation in one of the two copies of a gene, the study explained) for skin barrier mutations, and were co-exposed to food allergens like egg and peanut proteins, allergens in dust, and sodium lauryl sulfate, which is a soap found in infant cleansing wipes. As a result of their studies and comparing other research and data, the researchers believe that when the sodium lauryl sulphate lingers on an infants' skin, it disrupts the protective fatty barrier, increasing the chances of repeated exposure to allergens. And when it comes to babies with genetic mutations that leave them already predisposed to allergies, that disruption could lead to immune reactions if they're exposed through contact like kissing or other handling, The Daily Mail reported.

But Cook-Mills had advice for parents on how to combat the issue, according to Northwestern NOW:

Reduce baby’s skin exposure to the food allergens by washing your hands before handling the baby. Limit use of infant wipes that leave soap on the skin. Rinse soap off with water like we used to do years ago.

Which are all pretty basic suggestions, honestly, that can't hurt even if your baby isn't predisposed to allergies or otherwise at risk of developing a food allergy.

The bottom line is, it's not baby wipes alone that caused food allergies in this study, and there are a lot of factors involved. It's more about a combination of "environmental and genetic factors that must coexist" to trigger the allergies, Science Daily reported.

So don't throw out all your baby wipes out of fear that they'll cause a severe food allergy in your baby. Further research is clearly needed here — maybe even a new study of actual humans and their skin conditions and exposure to allergens and baby wipes, rather than past research compared to a study involving mice. And if you're truly concerned, talk to your pediatrician about your child and food allergies, because they'll probably have plenty of insight and information to put you at ease.