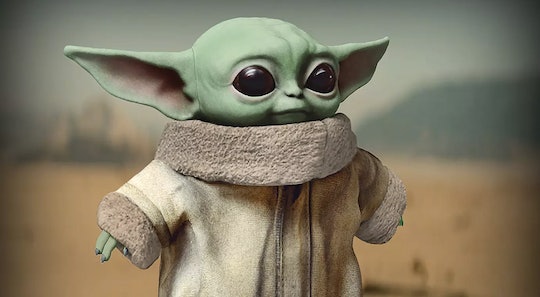 May The Force Be With You: Baby Yoda Merch Is Officially Available To Pre-Order

It's a great day for fans of The Mandalorian's breakout star — that's because a ton of Baby Yoda merch is officially ready to pre-order. And although this is amazing news (gimme all the Baby Yoda merch, please) there's a small wrinkle involving the holidays.

As of Tuesday, an 11-inch Mattel plush toy called "The Child" (aka Baby Yoda), is available for pre-order via Disney's website. "Fully embrace the cuteness of the 50-year-old Yoda species with this adorable 11-inch plush toy," the product description states. "He may look like a Baby Yoda, but this lovable creature is referred to as The Child."

But before you hit the pre-order button, it's important to note the toy won't ship until February 2020, according to a press release. This is bad news for parents hoping to snag the adorable plushie for the holidays — maybe it could work as a belated Valentine's Day gift?

Mattel isn't the only company cashing in on the Baby Yoda fandom. Toy company Funko is set to release Baby Yoda Funko POP! bobble heads available in two forms, a 3.75-inch figure and a second version clocking in at 10 inches tall, according to Gizmodo.

Similarly to "The Child" plushie, the bobble heads will also ship in February 2020, and are available to pre-order on Disney's website, FYE, Target, and Walmart at a later date.

If you're bummed about the delayed ship dates, take solace in knowing additional Baby Yoda merch is on the way.

“It was important to us that the reveal of the new character, the Child, be a special moment for fans, and we could not be more thrilled with the response,” said Paul Southern, SVP, Licensing and Franchise, Lucasfilm in a press release.

Southern continued, “Today, we’re excited to release new products for pre-order on shopDisney.com, and are continuing to work closely with our licensees and retailers to roll out additional items including toys, collectibles, plush, games, apparel and more, allowing fans to celebrate the newest addition to Star Wars.”

Happy pre-ordering and may the force be with you!