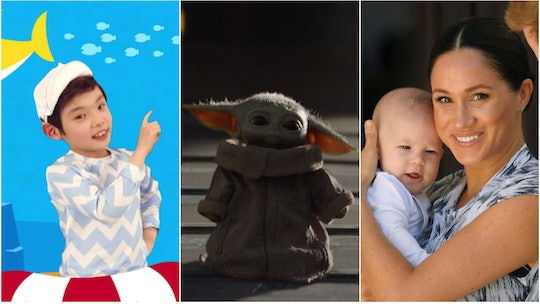 Each year, people across the United States turn to Google for answers to their most pressing questions. And now, as the year comes to an end, Google's Year in Search data roundup gives us the opportunity to reflect on 2019's most popular searches. It's an illuminating and often surprising look back. For example, the most searched baby in 2019 wasn't even a real baby. Despite their other otherworldly status, Baby Yoda was the most Googled baby of 2019, beating out both Baby Shark and Meghan Markle and Prince Harry's baby boy, Archie.

According to Google's Year in Search data, more people turned to Google for information about Baby Yoda (or perhaps just to browse cute photos of the small pea-green creature) than any other baby. And it's not like Baby Yoda didn't have competition. There were some seriously cute — and famous — babies born in 2019, including Queen Elizabeth II's eighth great grandchild, Kim Kardashian and Kanye West's fourth child, and singer Trey Songz's son.

What's really interesting here, however, is that the world wasn't even introduced to Baby Yoda until The Mandalorian hit Disney+ in mid-November. Meaning that more searches happened for Baby Yoda in just one month than have happened for any of their competition — many of whom have been known to the world for more than six months.

Interestingly, the year's second most Googled baby is also not an actual baby. Rather, it's "Baby Shark," the popular children's song that parents seem unable to escape. But while searches for Baby Yoda spiked rapidly when The Mandalorian dropped last month, searches pertaining to Baby Shark have, in comparison, remained relatively constant throughout the year, dropping off only slightly in November and December.

Trailing behind Baby Shark to be named the third most Googled baby of 2019 is baby Archie. The now 7-month-old son of Prince Harry and Markle was born earlier this year on May 6, at which time searches pertaining to him quickly spiked. By the end of that month, however, google inquiries related to the youngest royal baby had dropped off.

Still, it's hard to argue with how absolutely adorable Baby Yoda is, let alone resist the urge to Google screenshots and GIFs of the little guy. But is Baby Yoda's popularity only fleeting or will their cuteness carry them over into the new year to make them the most Googled baby of 2020 as well?