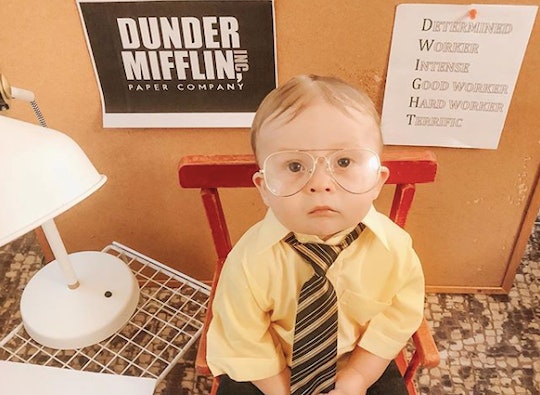 This Baby Dressed Up As Dwight Schrute & Everybody Stay Calm! Stay F*&#!#% Calm!

Wherever Michael Scott is at this very moment, I like to think he's losing his ever-loving mind over this adorable baby's Dwight Schrute Halloween costume. Because that's exactly what I, along with thousands of people across the internet, am doing upon seeing this little guy's perfectly styled costume inspired by everybody's favorite nerdy, clueless, Dunder Mifflin diehard character from The Office.

Like most warm-blooded humans, mom Jillian Sheffield of North Carolina is a fan of The Office, the hit documentary style TV show that ran on NBC from 2005 to 2013. "My husband and I love watching The Office together once we put the baby to bed," Sheffield tells Romper, "and Dwight's humor always makes us laugh."

For those who don't currently have The Office streaming on Netflix, Dwight Schrute's character, played by Rainn Wilson, is suspicious yet gullible, lacks a lot of common sense and social cues, and takes his job as a paper salesman and Assistant to the Regional Manager very, very seriously. Dwight, of course, also sells beets grown from his home on Schrute Farms with his cousin Mose. Needless to say, Dwight is the definition of a character.

Sheffield's photo of her 8-month-old son, Jack, perfectly captures all of Dwight's wacky traits, dry humor, and bare-bones approach to life. "All you need is love. false. the four basic human necessities are air, water, food, and shelter," Sheffield captioned the photo of her son, referencing one of Dwight's quotes. From Dwight's signature glasses, pale yellow button down shirt and tie, and hair styled with a middle part, Jack's costume couldn't be more spot-on.

At 8 months old, little Jack doesn't know just how perfect his costume is, of course, and how much fans of The Office are loving it. But that's exactly why his mom used this year as an opportunity to style him after one of her favorite shows. "He really has no idea what costumes are or what Halloween is so we figured we'd take advantage of that because I'm sure next year he'll want to choose his own," Sheffield says.

Sheffield's photo on Instagram of Jack dressed as a tiny Dwight, which has over 1,650 likes as of Friday afternoon, might have won Halloween in many people's opinions, but this actually isn't the only costume Sheffield has up her sleeve for her little guy. In fact, Sheffield has shared photos of Jack dressed up like a lumberjack, complete with a beard, as well as lead singer of Queen, Freddie Mercury.

"I think our little Jack is the cutest ever so I love all of them," Sheffield says of Jack's many adorable costumes, adding that his lumberjack costume is probably her favorite. On actual Halloween, Sheffield says she plans on dressing Jack in "his chicken costume since it's warm," which is pretty dang cute, and she and her husband will "throw on some overalls to look like farmers."

As for little Jack's plans for his first Halloween, Sheffield says because he's still too young for candy and trick-or-treating, they plan on keeping things simple. A simple Halloween, I think Dwight Schrute would approve.