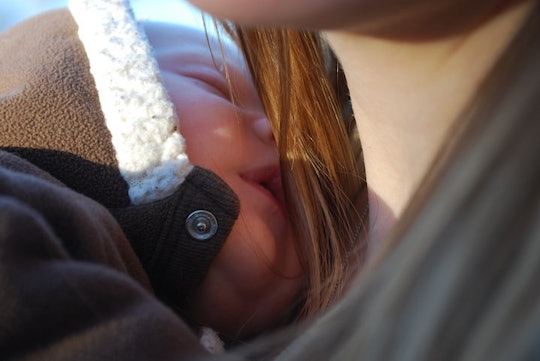 When I became a mother, I had two things already: a Moby wrap, which I had bought during my pregnancy; and a long history of mental health issues. I had, in fact, suffered mightily from prenatal depression and needed to take both anti-depressants and anti-anxiety medication. I’d also learned about attachment parenting and bought a wrap. I swore to my mother I was never going to put my baby down. She scoffed at me, probably because I sounded like a sanctimommy and I hadn’t even popped out the kid yet. But I did. I wore my baby throughout his infancy, and I think that it helped me with my postpartum depression.

We wrapped Blaise up on his first day in the hospital, and once we got home, he lived in that brown Moby wrap. At first, I took him out to nurse, but later I’d get the hang of nursing in the wrap. I also took him out when I slept, but we co-slept, so I held him in my arms all night. My friends complained they never saw his face, only his long elf hat dangling down my chest. Blaise, from the time he came home, was a worn baby.

A few days after I gave birth, I started to have issues. Eventually, my feelings blossomed into full-blown depression. Blaise was born near Christmas, and on New Year’s Eve, I handed the baby to my husband and sobbed alone in the bathroom. What had I done? What terrible mistake had I made, to think that I could have a baby? What had I done to my life?

But eventually, when you cry in the bathroom, you have to come out. There was a baby waiting for me, and he was hungry. I fed him, then wrapped him up. It made me feel better. I could put my arms around him, rock him back and forth. I discovered the rhythm of rocking him soothed me as much as it soothed Blaise. I put my lips down to his fuzzy head and inhaled his baby smell. There's some research to suggest that the scent of a baby's head triggers the release of dopamine in some women, which is associated with feelings of pleasure. And even though I was weakened by depression, I found that keeping him close to me and taking in his scent made me feel much better.

I felt like I had a life again. I felt like I was myself again. That’s what babywearing did: It gave me the freedom to be and do who I was.

This reaction wasn't totally in my head. There's some evidence that the physical contact that comes with babywearing can help alleviate the effects of postpartum depression. helped my depression in ways other than brain-chemical pathways, however. The Touch Research Institute once conducted a study where people with anxiety were given a chair massage twice a week for five weeks, causing their anxiety scores to drop. Holding Blaise and cuddling him constantly helped safeguard me against my depression worsening. Simple human contact affected me in ways I couldn’t have imagined.

Then there was the mobility aspect of babywearing. During the postpartum period, my depression was worst when I was stuck inside the house. I remember sitting on the couch once when Blaise was cluster-feeding at 7:00 p.m. He had been nursing for at least an hour, and would be nursing for another two. I looked at the clock. I realized we would normally be out to dinner or sitting down to drinks, and I cried. It seemed like I'd be nursing my child in front of trash TV for the rest of my life. But that ended when he was two weeks old, and we took him out to lunch at our favorite Szechuan restaurant. At that point, a whole new world opened up.

Soon I started hiking with Blaise strapped to my chest. We took him to his first National Park when he was only two weeks old, then hiked more than two miles. But we didn’t confine his exploits to the great outdoors. We realized that he slept most of the time in the wrap, which gave us the chance for an actual social life. So I found myself wearing Blaise at an oyster bar, both of my hands shucking and pouring Tiger Sauce and slurping up those delicious slippery morsels as he nursed.

Babywearing helped. It lessened the crying jags, it gave me something to look forward to, and it gave me the feeling that I was a competent new mother.

I felt like I had a life again. I felt like I was myself again. That’s what babywearing did: It gave me the freedom to be and do who I was, and that staved off the depression that was always lurking in the background.

I stayed on my medication, of course. And it helped. But so did babywearing. It lessened the crying jags, it gave me something to look forward to, and it gave me the feeling that I was a competent new mother. By the time Blaise was 2 months old, I was helping people learn to use their own wraps. That's how I met other mothers that way who shared my attachment parenting instincts and general hippiedom. They helped reassure me that I was doing the right thing.

Babywearing wasn’t the only thing that saved me from crippling depression — there was medication, and my husband, and therapy — but it helped. It was a protective factor for me: not just after this birth, but after every one. I’m grateful I discovered it right away. And I’m grateful my husband let me hog the baby.

More Like This
How A Recall Of Contaminated Formula Made The Formula Shortage Crisis So Much Worse
Can You Help Your Baby’s Hair Grow?
Breaking Down The Different Types Of Postpartum Infections
Here’s What You Need To Know About That Viral 1960s Baby Formula “Recipe”