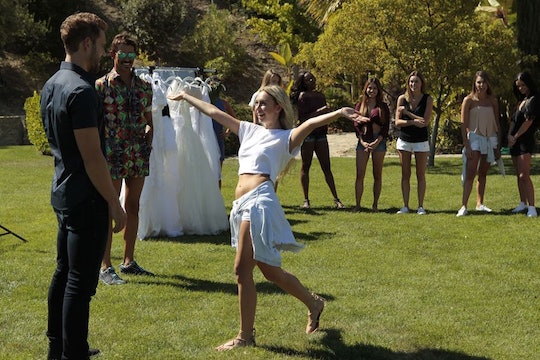 It's not always easy to play favorites, but it's difficult to deny that Bachelor in Paradise might be the most fun out of all the shows under the Bachelor umbrella. The relaxed structure makes it feel a little more spontaneous and a little harder to predict, plus nothing beats the sheer weirdness of it: the loudly-eaten personal pizzas, the heartfelt confessions to beach animals, and the zany opening credits. Bachelor in Paradise doesn't take itself half as seriously as its parent shows do, which makes it the perfect summer indulgence. And now the Bachelor in Paradise 4 cast list has been released, giving fans a chance to make predictions about who might hit it off with who.

The lineup for Bachelor in Paradise Season 4 is made up mostly of recent contestants from Nick Viall and JoJo Fletcher's seasons, with a few fan favorites and controversial contestants in the group. That lineup is sure to change over the course of the season since people come and go fast in Paradise, plus not enough of Rachel Lindsay's suitors have gotten the boot yet for them to be announced as players on Paradise. Still, the group gathered for Season 4 is a pretty good one. Any number of pairs could spark – or at least cause some decent drama.

Corinne was made for Bachelor in Paradise. In fact, Bachelor in Paradise may have been conceived of three years ago with the hopes that one day someone like Corinne would find their way to the beach. There was no doubt that she was going to end up on Season 4, but it's nice to have it confirmed.

Raven was the runner-up on Nick's season, making her an ideal choice for Paradise. Get ready to hear about how she had her heart broken but she's ready to give love another shot.

Amanda ended the last season of Bachelor in Paradise engaged to Josh Murray, but things didn't work out between them once they returned home. Now she'll be back to give it another try. But will she be able to incite more late night beach brawls over her honor? Tune in to find out.

All I'm gonna say is, she better pack her shark costume. At least on the beach it'll be on theme!

I will leave you with a relevant quote from Derek's Bachelorette questionnaire, when he was asked what he could not tolerate on a desert island: "As long as the island wasn't covered in cucumbers, I'd be all right." Hopefully Bachelor in Paradise's beach will be up to his cucumber-free standards.

DeMario was just unceremoniously dumped from The Bachelorette not once but twice and the dramatic circumstances of it proved he will undoubtedly bring some prime messiness to Paradise.

I'll admit it: I don't quite recall anything Lacey got up to during her time trying to woo Nick, probably because she was eliminated in Week 2. Maybe she'll be able to make more of an impact on Bachelor in Paradise.

Nick was the guy who showed up to meet JoJo dressed as Santa. It's not as good as a sha-dolphin, but sure.

Danielle grew closer to Nick when she shared the story of her late fiancé's passing, but their relationship didn't pan out. Maybe she'll have better luck in Paradise.

I think it's clear who is going to be giving the analytical oceanside therapy sessions on this season of Bachelor in Paradise: instead of Nick talking down Ashley I., a.k.a. La Llorona, Taylor can take on the hard conversations. She has plenty of practice.

As JoJo's runner-up, it was only a matter of time until Robby made his way to Bachelor in Paradise. What are the odds he and Raven hit it off, runner-up to runner-up?

Kristina's heartbreaking backstory made her a memorable contestant on Nick's season and it was easy to root for her, so it'll be nice to see her find someone on Paradise.

Ben made it all the way to Week 6 on Kaitlyn Bristowe's season of The Bachelorette, making him one of the few not from one of the most recent seasons. He was disappointed to say goodbye to Kaitlyn, but he's clearly ready to try again.

Jasmine's time on Nick's season of The Bachelor came to an uncomfortable end when she demanded more attention and sort of tried to choke him (as...a...joke??). Fingers crossed she doesn't repeat the behavior in Paradise.

None of his Paradise dates could ever top the time he and JoJo weirdly laid on a horse, but hopefully they come close in terms of randomness. Just please leave the Pringles at home this time, sir.

Second time's the charm, right? Vinny's last trip to Mexico went from the highest of highs to the lowest of lows real fast, so he definitely deserves a redo.

With a good mix of memorable contestants (and a few wildcards), Season 4 of Bachelor in Paradise promises to be an exciting one.