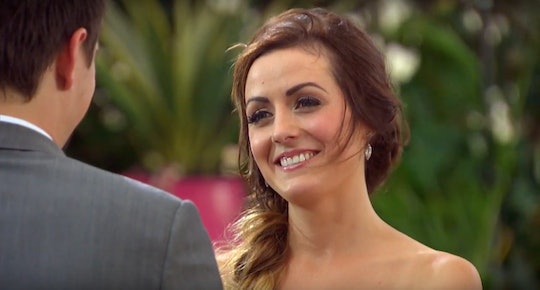 For Bachelor in Paradise alums Carly Waddell and Evan Bass, finding love on a reality TV show has been working out splendidly so far. The newly-married couple is expecting a baby, and giving the world plenty of updates along the way. On Monday, Waddell showed off her pregnancy bump in an Instagram post that had Bachelor Nation fans squeeing with delight (and also laughing at an all-too-relatable Chipotle joke). It seems that The Bachelor franchise can lead to long-term love stories after all.

Waddell and Bass fell for each other on the third season of Bachelor in Paradise, both having been burned by the reality TV dating scene before. Initially, it seemed like things might not work out for the pair, despite the beautiful Puerto Vallarta, Mexico scenery in which they were stuck together.

But after Bass had to reportedly go to the hospital and Waddell accompanied him with the cameras turned off, the pair fell deeply in love. By the end of the season, he had proposed, and not long after, they returned to Mexico to get married in the same place they had filmed their season, with Bachelor host and wise love guide Chris Harrison officiating the June ceremony.

It didn't take long after that for the duo to announce that they were expecting their first child together last month. And on Monday, Waddell gave fans a peek into her pregnancy with the first public picture of her bump. "Well, I'm either having a baby or just ate chipotle (either way seems I'm winning at life)," she captioned the adorable shot.

While housing a Chipotle burrito is a perfectly valid thing to celebrate (I celebrate my own burrito bumps all the time!), fans were extra excited about having a new Bachelor Nation baby on the way, even if initially, everyone was a little surprised by the news.

It was a great surprise, it’s a great little miracle. I was a little late … We took a pregnancy test in Mexico, and we saw the thing [in Spanish] and were like, "What does that even say?" So we Googled it.

The pregnancy may have been a surprise, but Waddell has previously made it clear how excited she was to have children with Bass, who is already a father to three boys from a previous relationship.

Not long before Bass proposed, Waddell told Glamour that she loved the idea of having a big family with him, saying:

I’m so excited about him having kids. I can’t wait. I know he’s dated people in the past that have said, "Oh, you’re a dad? I’m not into that." I’m so into that. I’m 30. I want kids; he wants more kids. We’ve already discussed that. He has three boys — ages 14, 11, and 8. We’ve talked about having kids. He wants more, and I’m game. We’re just going to be maybe one big happy family, and I’m so excited. I can’t even contain my excitement for that.

She and Bass aren't the only ones feeling excited. Bachelor Nation fans are a devoted bunch, but they've had their hearts broken all too often when the couples they've grown to love split up after the cameras go away and the fairy tale TV romance has to contend with the challenges of real life.

So the news that Waddell and Bass were committing to a family together had a lot of people on social media feeling head over heels with hope.

Bachelor fans will be expecting many more updates as Waddell's February 2018 due date approaches. And if Monday's picture is any indication, Waddell seems like she'll be happy to provide more news with a healthy dose of cuteness and humor.